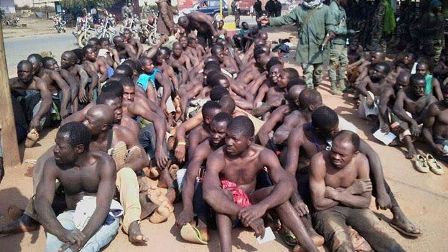 Nineteen out of the 21 suspects detained in Bamenda following the razing of Wum military barracks were reportedly transferred to Yaounde on Friday, April 22, 2016.

According to our sources, the Military Court in Yaounde ordered their colleagues in Bamenda to transfer the detainees who were awaiting trial at the Bamenda Prisons under the cover of darkness on that Friday.
Our sources disclosed that the Chief Judge at the Yaounde Military Court, Captain Frederic Poh Mbolule, signed order No. 090/ORD/CI/16 dated April 16, 2016, instructing that the 19 suspects be taken over to Yaounde at midnight to avert any eventuality or resistance from the Wum population resident in Bamenda.

Speaking to The Post, the defence counsel for the detainees, Barrister Willy Buh, argued that his clients were not supposed to be taken to Yaounde under the cover of darkness.

Barrister Buh said this smacks of nothing short of torture to death, because, the crime they are suspected to have committed took place in Wum town of Menchum Division in the Northwest and not in Yaounde.

“If the intention is not to continue inflicting torture on my clients in faraway Yaounde, tell me the motive of whisking them off at midnight. When they were transferred from Wum to Bamenda, we protested to no avail, and now they have been taken far away from relatives who were trekking to Up-Station in Bamenda everyday and giving them food, not to talk of their health conditions.

As counsel for the detainees, I was supposed to have been informed that they were transferring my clients to Yaounde – but nobody informed me. By the way, there is a competent Military Tribunal in Bamenda that could handle and determine this matter.

Our fear is that most of the detainees will be tortured to death, because latest information reaching us is that the torture started from Up-Station right to Yaounde that Friday night,” Barrister Buh lamented.

It would be recalled that on Saturday, January 23, 2016, an angry crowd stormed the Wum military barracks and burnt it down. Their anger was provoked by the stabbing to death of a commercial motorcycle rider, 23-year-old Leonard Mih Ngong, by a soldier during a fight over a girl.

Wum then fell under an undeclared state of emergency and many people were arrested by security forces and later ferried to detention in Bamenda.