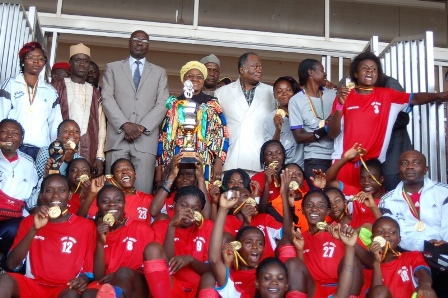 Louves Minproff football team has been crowned champions of the 2015 female football cup completion after beating Amazon FAP FC 2-1 at the Mfandena Stadium.

Isis Songkeng opened score at the 29th minute, after converting a pass from her team mate to put her team on the lead.
Inspired by the opening goal, Andrienne Ivem doubled the scores at the 37th minute, benefitting from a porous defence line of the opponent.

Before the final whistle for the end of the first half, Amazon FC bounced back on a good note as they reduced the score line through Agnes Nkada.
Her strike, from the centre circle, gave Carol Mamboe (Louves Minproff Keeper) hard times and the ball bounced over her and idled in to make it 2-1 in favour of Louves Minproff.

Even though Louves Minproff dominated the game in the first half, the situation in the second half was totally different as Amazon took the bold by the horns, controlling from all angles.
Despites the domination, Amazon FC failed to make good use of their goal chances, giving Minproff FC chances to increase their tally when they failed to create a difference.

At the 78th minute, Harrite Michele, who gave Amozon FAP difficult moments, almost gave her team, Minproff FC, the third goal but thanks to the cross bar that saved Amazon from drowning deeper.
At full time, it was Lovues Minproff FC that had taken the coveted trophy to be crowned champions of 2015, with Isis Songkeng receiving the best player award.

Speaking after the final that was witnessed by Government officials and stakeholders of the football in Cameroon, the President of the Normalisation Committee of FECAFOOT, Prof. Joeseph Owona, and the Minister of Sports and Physical Education, Adoum Garoua, appreciated the playing style of the two teams and called on the girls to remain focused as they expose and defend the national colours in and out of the country.

While the female football champion has been known, the male Cameroon Cup champions will be known in the coming days as teams take on each other in the quarter finals around the country.