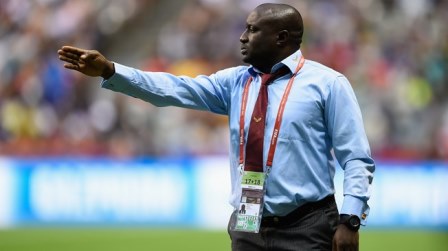 The Coach of the Indomitable Lionesses of Cameroon, Enow Ngachu, has attributed the poor performances of African teams in Major global competitions to poor preparations.

Coach Enow Ngachu was speaking after his team was booted out of the 2015 FIFA Women’s World Cup by the Steel Roses of China.
“We have talented players. The problem African nation’s face is preparation. The day we will prepare well, an African nation will be able to win the World Cup.”

Judging from these utterances, Enow Ngachu was simply telling reporters that if his programme of preparation, made available some months before the competition was accepted, the Lionesses would have had a better performance at the World Cup.

Revisiting the programme, The Post learnt that after their preparation in Cameroon, the Lionesses were supposed to play two friendly matches with the Super Falcons of Nigeria and Bayana Bayana of South Africa.

The next preparatory phase was to be in Europe, where they were expected to play three friendly encounters, one with a European team, and another with an Asian team, while the last friendly was to be with a South American team.

The programme further stated that the Lioness were supposed to be in the United States of America, where they were also expected to play three friendlies before flying to Canada for the Ladies jamboree.

Many soccer pundits hold that if this programme proposed by Enow was strictly followed, the Lionesses would have produced a better output in Canada. According to them, money that was supposed to be used for such preparations ended up in private pockets.

Nevertheless, fans in Yaounde said it is the lack of focus that is killing Cameroon football, especially the female national team that has never been valued.

To lovers of soccer, if the Lionesses had the opportunity to play friendly matches with teams out of the country before the competition, as proposed by the coach, the Lionesses would have gathered a lot of experience, especially with the style of play of teams that are regular participants in the competition.

Meanwhile, fans feared that after the brilliant display by the Lionesses in the 2015 World Cup in Canada, the coach may be come under pressure of calling up certain players in subsequent competitions.

Enow’s longevity with the team has proven that it is not the sacking of coaches and the manipulation of funds that can solve the problem, but devotedness and confidence can play the trick.

Today, Enow Ngachu and the girls are being showered with praises, but they may become villains tomorrow if they falter.

In line with Enow Ngachu’s words, it is hoped that after the Canada expedition, female football in Cameroon will be developed as well as its organisation worked upon.

It also hoped that the female national championship in Cameroon will be given a new impetus. Useful preparations should be put in place by sport authorities ahead of any international outing.

One thought on “African Nations Problem Is Preparation – COACH”