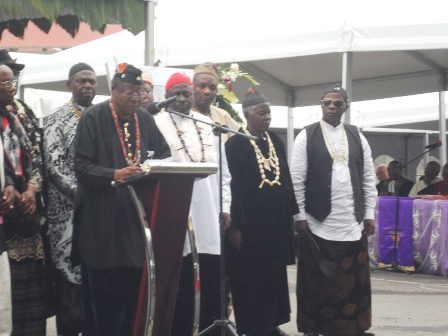 Scores of traditional rulers across Meme Division, Southwest Region, now go about their daily engagements without caps on their heads.

This phenomenon is seen as a move to avoid potential attacks and threats to life.
The traditional rulers known to put on caps that stand them out even in public gatherings now go around the metropolis of Kumba void of their royal caps. Most of them don’t put on any other cap. Their heads are now exposed like ordinary citizens.

It looks like some form of camouflage from the Chiefs to fit into the society owing to the commotion and confusion set into Meme from recent developments of the Anglophone Crisis.

There is also the noticeableabsence of other royal items worn on the neck and hands. These are no longer part of the daily dress code of Chiefs. Their traditional brooms have also vanished.
In the last two weeks, it hasbeen rare to spot a Meme Chief putting on traditional beads. Things associated with tradition or royalty, externally, are absent.

A member of the Bakundu Chiefs Conference that The Post approached on the new development, said it is part of individual security measures.

The traditional ruler who opened up to The Post on condition of anonymity said: “Things have gone out of hand. We didn’t expect this …. When people, for no reason, begin to target custodians of tradition, then, it means something has gone out of place in the society. Even enemies of some traditional rulers may want to use this current crisis to settle personal scores. So, we are all aware of these things.

You see what happened to our colleague of Ngongo … it is sickening,” the traditional ruler lamented.
Another Chief interviewed said the war has been shifted into the camp of the Chiefs with threatening messages. “With one Chief already killed, there is no room for jokes,” he averred.

Asked if the traditional rulers cannot use charms to fight back, the Chief said the situation is still under consideration.

The royal father said, among them, there are Chiefs with powers but they are just being cautious not to enter a realm where the damage might be regrettable. Our sources said, at the moment, even some calibre of politicians are not needed besides traditional rulers.