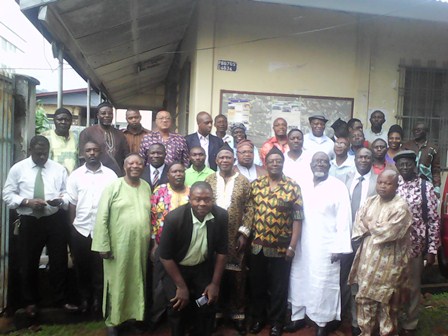 After Common Law Advocates, Anglophone Educationists and Civil Society Organisations, CSOs, have through the Cameroon Education Forum; CEF, dispatched a memo to Prime Minister, Philemon Yang, demanding the creation of two separate Educational Councils or Boards in Cameroon as stipulated by law No 98/004 of April, 1998.

The memo signed by CEF’s Protem Chairman, Wilfred Ntoko Ntube and Protem Secretary General, Andrew Azong Wara was forwarded to the Head of government, during the launching of CEF in Bamenda.

In the memorandum, the CEF executives outlined the main objective of the Forum which is to “assess the quality and performance of the implementation of certain provisions of the 1998 Education Law and to make necessary recommendations in view of more efficient and effective Education Sub- System.”
In this light, the Cameroon Education Forum is demanding the creation of two separate Educational Councils or Boards, one for the Anglophone and the other for the Francophone Sub-Systems of Education as contained in 1998 Education Law, which the executive said was endorsed by the President of the Republic of Cameroon to maintain Cameroon’s biculturalism.

According to the memo, the spirit of the 1998 law was that each of the two Sub-Systems of education should co-exist without one interfering with or strangling the other.
The memorandum therefore examines the problems plaguing Anglophone Education in Cameroon and presented the two separate Councils as advisory bodies to government as a major solution.
The General Assembly of CEF admonished all Education stakeholders and parents in particular, to “throw their weight behind the Memorandum so as to bring to fruition the Anglophone Education Council provided for by law.”

Speaking during the launching of the Forum, Hon Lucas Tasi Ntang, said a constitutive committee comprising some retired Educators of Cameroon, AREC, the Cameroon Teachers’ Trade Union, CATTU, the Teachers Association of Cameroon TAC, People Earth Wise, PEW, and some educationists and consultants met severally in Buea to brainstorm and form ideas in order to build synergy as Anglophones to appreciate, evaluate and respond to the “arbitrary, repressive and oppressive approaches to lame school renewal in our dysfunctional education system. We all know that formal and informal education in our cultural environment, are beset and bedeviled by inertia, deadlock and paralysis. The average teacher is restless and restive, the pupils and students are helpless, while the parents are powerless.

In fact, most stakeholders in the educational sector are complaining and crying foul”. Hon Tasi Ntang noted.
He vowed that they are ready to die for the course to ensure that the Anglophone educational system is revamped. “We are literate people and if the government cannot yield to our grievances, we shall be left with no other option than to turn the other side of the coin.”
Tasi Ntang said CEF is aware that there shall be challenges, but that with the help of God, they will surmount the challenges.

The National President of the Union of Parents Teachers Association, UPTA, Joseph Amuntung, said the birth of CEF is a big relief and promised that the Anglophone parents are poised to pursue the course to the end.

“Our rights to give our children the right education must be respected.”
On his part, Prof. Anthony Ndi, Lecturer at the Catholic University of Bamenda said Anglophones have reached a point of despair, “the bugging questions are; what future are we providing for our kids who look up to us for direction? What response do we give to bewildered parents desperately seeking for meaning in a chaotic system?, What legacy as enlightened Anglophone educationists do we leave for posterity? What account do we give of our stewardship to those dedicated ancestral figures, who laboured so hard to lay the Anglo-Saxon foundation, which is being shattered under our watch?” Prof. Anthony Ndi quipped.

The former Deputy Registrar of the GCE Board, Johannes Mbong Ngole, who doubles as Protem Committee Member of CEF, said CEF is not out to fight government, but to make proposals that will enhance an efficient and effective Anglophone Sub-System of education and above all, a more coherent, functional, and performing National Education that would respond to the objectives spelled out in education law and give the nation its rightful place in the concert of nations.