Bits And Pieces On Fight Against COVID-19 In Cameroon: Gov’t Resists Calls For Total Confinement 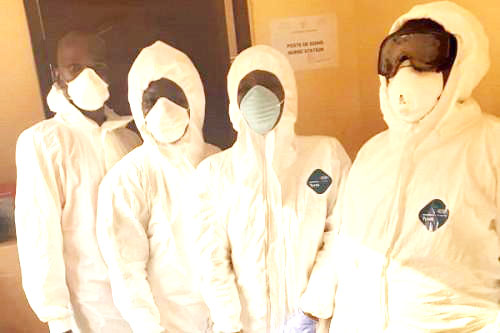 Since the first case of COVID-19 was detected in Cameroon, March 6, the Government has continued to resists calls by public health professionals for a total confinement of the population in towns like Yaounde, Douala and Bafoussam that have high prevalence rate of the virus. The Cameroon Medical Council led by its President, Dr. Guy Sandjo, organised a press conference in Yaounde, to press on the Government to embark on a total confinement of the population.

As the Cameroon Medical Council insisted, “the total confinement should be now and not tomorrow”. The Council strongly advised the Government to avoid making the same mistakes like some European countries did by delaying confinement, only to do it later when COVID – 19 had already spread far and wide in their communities. The rapid spread of covid has affected many far and wide, that is why coming down on it hard and making sure people are tested as well as protected is a necessity. To find the best equipment to handle the testing process, governments have thought to consider looking at SciQuip’s range of equipment so they can stock up for any and all reasons in case of further waves and spikes in certain regions. There is also the call for workplaces that have stayed open to ensure that all staff is safe by implementing safety measures like non-touch techniques, and plastic partitions, etc. as well as calling in professional cleaners such as a Commercial Cleaning Kingston company like htmlimited.ca, for example, to help workplaces remain open but protected.

The pretext of the Cameroon Government is that it would seriously affect the economy. That argument is, however, being challenged by many people, who say the Government’s hesitation to declare a lockdown is because it is not willing to provide the accompanying measures that the population is demanding. If big economies like Britain, Italy, Spain, South Africa, France, and others can embark on a lockdown as a major strategy to stop the spread of COVID-19, what more of Cameroon! New York has been locked down for weeks. On April 13, the Nigerian Government that had opted for partial confinement extended the lockdown of Lagos, Abuja, and Ogun States by two weeks.

If Lagos can be lockdown, what more of Douala! A public health expert in Douala, Dr Roger Etoa, cannot understand the reason for the hesitation, when a country like India has locked down to curb the spread of the pandemic.

In fact, health experts are blaming the Cameroon Government for the increasing spread of COVID-19 in the country.

Speaking in Yaounde, April 16, Prime Minister, Chief Dr. Joseph Dion Ngute, admitted that: “It appears the number of people (in the country) tested positive for COVID-19 continue to increase”.

On April 17 after the Prime Minister’s remarks, the Adamawa that had been one of the four Regions in the country without COVID-19 registered its first confirmed case of the virus.

The Minister of Public Health, Manoauda Malachie, April 16, said some 24 medical personnel handling COVID-19 cases in hospital across the country have been infected by the virus.

He promised that the Government was taking appropriate measures to better protect health personnel in the fight against the virus. This was the first time the Public Health Minister was admitting that some health personnel have been infected by the virus.

He had previously dismissed some social media reports on the issue as fake news, even though the statistics in the reports were exaggerated.

MANIDEM National Secretary for Communication, April 15, disclosed that the party’s National President, Ekane Anicet, was infected by COVID-19 and that he has recovered after spending days in quarantine. MANIDEM paid tribute to the medical personnel who took care of the party’s President for their prompt reaction and care.

On April 16, Ekane himself disclosed that he contracted the virus during a visit to the Douala International Airport, March 17, just like Littoral Governor, Samuel Dieudonné Ivaha Diboua, who also recovered recently. It would be recalled that some 261 passengers, predominantly Cameroonians, arrived the Douala International Airport, March 17 by Air France and SN Brussels.

Even though the passengers all swore that they did not have the virus, it later turned out some of them had it, and had contaminated some locals.

Censorship Of Information On COVID-19

Cameroon Government through the Minister of Public Health, Manoauda Malachie, started the fight against COVID-19 by tweeting the number of infected persons in the country, the number of cases that had been cured, and the number of deaths registered.

It was appreciated and the Minister, April 16, acknowledged that the daily publication of the statistics also served as a strategy to convince the doubting ‘Thomases’ that COVID-19 is real. The daily publication of statistics is a common practice in different countries hit by the COVID–19. But unfortunately Cameroon’s Minister of Public Health has stopped giving the daily statistics. Instead, the only data that the Government now gives out on a daily basis is information focused on COVID-19 persons that have been cured.

Minister Malachie claims that the decision to stop giving the daily statistics on number of infected persons followed complaints by many Cameroonians that the statistics were creating panic in the population.

Many observers think the Government is simply trying to give a positive spin to a bad situation; as such Cameroonians have started doubting Government’s statistics.

One of the measures taken by the Government in the fight against COVID-19 in the country is the mandatory wearing of masks by the population. The decision was salutary because it is one of the key measures the World Health Organisation, WHO, strongly recommends to preventing COVID-19.

Since the first case of COVID -19 was detected in Cameroon in early March, the Government has been encouraging the population to wear masks, but without encouraging the corresponding production of the masks. In fact, it was only on Wednesday, April 8, a day before the Prime Minister made the announcement for the compulsory wearing of masks, that the Minister of Mines, Industry and Technological Development, Gabriel Dodo Ndoke, came to Douala to discuss with CICAM on the production of masks to respect the order.

The production, which started, April 9 is done by some small enterprises in collaboration with CICAM. The material is being provided by CICAM. The first consignment will be ready by April 25.

Absence Of Masks In Rural Areas

In a speech delivered after the inter-ministerial meeting on the fight against COVID-19 in Yaounde, Thursday, April 16, the Prime Minister claimed that “a large majority” of Cameroonians are respecting Government order which harp on the compulsory wearing of the masks.

But officials of the Cameroon Medical Council have made it clear that there is “an active shortage of good masks in the country, even for medics”.

The situation is worst in rural areas, as many villages across the country are without the low quality masks fabricated by local tailors. In fact, on April 16, Canal 2 International reported that in President Biya’s South Region, most people were not wearing the face masks.

The Chiefs of those villages blamed the situation on the absence of the masks in their markets. They said to get a mask one has to pay transport to Sangmelima, Ebolowa or Kribi to get one. It is the same situation in all the other regions of the country.

Sources in Bali Nyonga in the Northwest Region for example, say for one to get a mask, he or she has to either depend on a relative in Bamenda to buy and sent to him in the village.

Medics Worry About Quality Of Many Masks

Many medics have expressed concern with the quality of the masks fabricated by local tailors, which is what many Cameroonians are using. The Deputy Secretary General of the Cameroon Medical Council, Dr Peter-Louis Ndifor, said most of the masks that local tailors have been fabricating is just one layer of tissue. Whereas, a good mask should be two or three layers of tissue. Dr Ndifor said what many people in the country are wearing as masks cannot stop COVID-19 from penetrating.

To the Medic, mask made of one layer of tissue can only stop dust and not the virus. In the absence of official directives, many local tailors in Douala for example, who had never sewed a mask before, just jumped into the fabrication of masks which has become a lucrative business.

It was only on April 13, which was the day the Government scheduled for the start of the compulsory wearing of masks that the Minister of Mines, Industry and Technological Development, published the norms on the fabrication of masks, especially on mass production.

Another fear with the masks that local tailors are fabricating and selling is the fear of contamination during the production. All the masks that are being fabricated in Yaounde and Douala by some small enterprises in collaboration with CICAM will be sent to CICAM to sterilise before they are sent to the market. But the masks being fabricated by local tailors go straight into the market without sterilisation.

Many people complain that the one layer tissue masks being fabricated by local tailors are generally very inconvenient to wear, as most of them make it difficult for one to breath.

That is why in a town like Douala, where the temperature is often high, many people seen on streets instead hang what are supposed to be masks on their chins. As many observers are pointing out, the masks have become more of chin masks. But medics have been warning that masks are meant to cover the nose and the mouth, and that turning them into chin masks does not help in the purpose they are meant to serve.

Meanwhile, one of the reasons that many people go for the low quality masks fabricated by local tailors is that it is relatively cheaper. A locally made mask is sold between FCFA 200 and FCFA 500, while a quality masks in a pharmacy cost between FCFA 1000 and FCFA 2000. Observers agree that only a mass production of good quality masks, will solve this problem of masks being turned into chin masks.

The Cameroon Government is furious over criticisms by the foreign media and some politicians in the way it has been handling the fight against COVID-19. In a communiqué issued by the Minister of Communication, René Emmanuel Sadi, April 16, the Minister, who doubles as Government Spokesperson, condemned what he termed as a “smear stigmatisation campaign” being carried out by foreign media organs and some ill-intentioned politicians on Cameroon’s fight against COVID-19.

In most of the countries hit by COVID-19 across the world, their Presidents are regularly seen leading the fight against the deadly virus. Also, in other countries, the Governments listen to the advices given by medical professionals, considering that the COVID-19 issue is a health crisis. In Cameroon, advices given by the Cameroon Medical Association’s governing body are ignored by the Government.