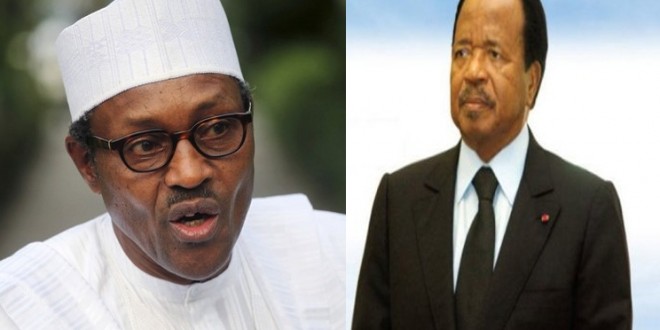 President Paul Biya and his Nigerian counterpart, Muhamadu Buhari, will synergise their strategies in the fight against the terrorist group, Boko Haram, when the President of the world’s most populous Black nation visits Yaounde soon.

According to unofficial sources, the man who officially became the new ‘Aso Rock’ tenant on May 29, 2015, will pay an official visit to Cameroon from July 29 to 30.

Although the purpose of the visit, which is at the behest of Cameroon’s President, has not yet been stated, diplomatic sources indicate that both leaders will use the occasion to sink their differences in common strategies against Boko Haram that is wrecking havoc in both countries.

Observers hold that both Presidents will also use the visit to redeem the Cameroon-Nigerian relations that have recently suffered tremendous chilling by differences over the fight against Boko Haram.
Before President Buhari announced to the press during an all summit in South Africa that he was planning to visit Cameroon, talk was rife that Aso Rock and Etoudi power houses were sustaining an arm’s length relation.

Diplomatic rumour-mongers were tongue-in ear that Buhari was paying Biya in his own coins. President Biya did not attend Buhari’s swearing in ceremony in Abuja last May 29.

He, however, sent a delegation led by the Vice Prime Minister in charge of Relations with Parliament, Amadou Ali. Some diplomatic analysts picked-holes with the delegation, saying it was low-level, given the magnitude of the event, its circumstances and timing.

Buhari had visited Niger and Chad and did not come to Cameroon, considered Nigeria’s most strategic partner against Boko Haram. The lurking suspicion was somewhat laid to rest when President Biya sent a special envoy to Abuja on June 23.
The envoy, Emmanuel Rene Sadi, Minister of Territorial Administration and Decentralisation, was bearer of Biya’s invitation to Buhari.

It is expected that when the visiting septuagenarian Aso Rock tenant comes calling on July 29, the Presidential duo will sign military agreements that will synergise and strategise their onslaught against the terrorists group.

It will be a divorce from differences that made Boko Haram to savour impunity in certain border areas between both countries. When Nigeria suspected that Boko Haram was in some border areas in the Cameroonian territory, Abuja appealed to Yaounde to let their forces comb the areas. The Post learnt that the Yaoundeauthorities rejected such a demand for fear that the intervention of Nigerian forces could destabilise the Far North Region.

When the Islamic sect multiplied kidnappings in 2013 in the Far North Region, Cameroon proposed that both countries should have a joint force that could storm both territories at will when need arose. Nigeria is reported to have roundly rejected such a proposal.

The former Nigerian President, GoodLuck Jonathan reiterated his country’s stance during the anti-Boko Haram summit in Paris on May 17, 2014.

But, after walking in to Jonathan’s shoes, Buhari seems to have taken great exception to the presence of any foreign troops in his territory. To him, Nigerian forces are ready to cooperate with forces of neighbouring countries, but insisted that the troops must only work in their various countries.

As time ticks, away to the official visit, diplomats of both countries are said to be working overtime to give the occasion a veneer of spectacular success. During the visit, both Presidents will jointly solicit the approval of the UN Security Council for the intervention of the multi-national task force against Boko Haram.

Despite differences between the two countries, analysts say Cameroon and Nigeria are bound to be each other’s keeper at least, for the sake of convenience. For one thing, both countries are brothers and sisters by history and neighbours by geography.

Part of Cameroon known as Southern Cameroons, was administered as part of Nigeria during the British colonial reign. With the rise of Boko Haram, both countries have no choice but to love each other and strategiseagainsta common enemy. Besides, both countries are important trade partners to each other.