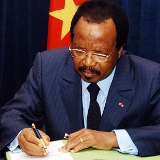 President Paul Biya has ordered Government to unmask and dislodge over 10,000 ghost workers and fake pensioners.

These workers have been cheating the State by unduly earning salaries every month.

The order is one of the recommendations the President made in a recent circular in which he gave orientations for the 2018 state budget.

The recommendation that resides in section 33 of the circular is intended to enable Government reduce the bloated state wage bill that remains a huge financial load on its shoulders.

In 2000, Government carried out a census of State workers that revealed that there were over 7,000 fake and ghost workers, who were unduly feeding fat from the State payroll.

Economists hold that the number has increased to the extent that there are over 10,000 of them now cheating the State.

Added to this number, The Post learnt, are genuine civil servants who earn more than two salaries and take home fraudulent allowances every month.

Observers are already pessimistic that the head count of State workers will yield little dividends because many civil servants who have abandoned their jobs and now live abroad, will quickly rush back home to prove effective presence as usual.

The pessimism is predicated on the fact that such unscrupulous people succeed to cheat Government with the complicity of some officials in the various Ministries.

The head count that will begin in 2018, compels every Ministry or and State department to provide an exhaustive list of all those who are effectively working.

From the look of things, the exercise will only be a success through magic, especially in a situation where hierarchy in the various Ministries refuses to denounce absenteeism.

The Inter-ministerial Committee that will carry out the exercise will have to pay particular attention on certain Ministries where fraud and complicity are rampant.

The Ministries of Secondary Education, Basic Education, Public Health, Agriculture and Rural Development and Livestock, Fisheries and Animal Industries have been cited.

It is reported that besides those who abandon their jobs but not salaries, many civil servants extend their study leaves without permission.

In order to fish out such public service criminals, Government is designing a project to merge Operation Antelope and SIGIPES operation carried out by the Ministry of Public Service and Administrative Reforms.
The Operation Antelope is the computerisation of salary.

The merging will enable the new outfit to treat both the salary and career profiles of all the civil servants.

The census exercise will help the State to solve the mystery in which a public service bloated with so many civil servants still lacks personnel.

The exercise that is one of the measures aimed at streamlining public spending and the stringent management of public revenue, is imperative.

It is coming at a time when the State treasury is suffering from a deadly financial asphyxia. Like other countries of the CEMAC Sub Region, President Paul Biya’s country is facing sad economic times.

The situation has been blamed on the fall of prices of crude oil and other raw materials like cocoa and coffee in the world market.

The Economic Partnership Agreement, EPA, that Cameroon signed with the European Union, EU, has afflicted a heavy loss on the country’s custom revenue, thereby aggravating the situation.

The fight against Boko Haram has been costly thereby leaving a big hole in the country’s wallet.

Government’s current deal with the IMF compels the authorities to clean its Augean stables to ensure economic recovery.

This explains why the authorities are contemplating going the whole hog of reforms, including an increase in taxes and a cut in salaries.

The presidential instructions that Biya dished out in the June 20 circular, are so stern that many heads are expected to roll in the public service when the chips finally come down.