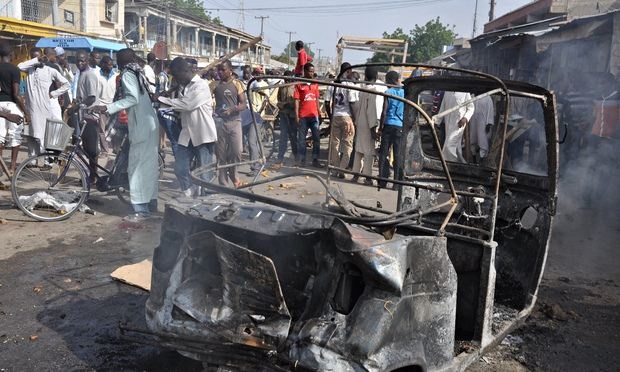 Barely a day after hundreds of Chadian tanks rolled into Cameroon to help the country’s army tackle the threat of the Nigerian fundamentalist Boko Haram, the group scored a major, albeit macabre, coup in the Far North Region on Sunday, in an attack that the saw the killing of four civilians, the abduction of up to 60 persons and the torching of about 80 houses.

Security sources said scores of armed Islamist militants stormed the villages of Maki and Mada, as well as two other villages near Mokolo, indiscriminately attacking people, setting houses ablaze and abducting civilians. Many of the abductees are said to be women and children. The four persons who died are said to have attempted to fight back or resist the militants’ foray into their villages. No casualties were reported on the side of the militants.

Eyewitnesses recounted that the militants left the area immediately after the attack, taking along the abductees and driving in the direction of Nigeria.

Government sources said it was not possible to give an exact number of abductees before investigations are complete, but estimates so far range from 30 to 60. Independent sources say the figure may be much higher. If any of the figures are confirmed, it would be the largest single abductions by Boko Haram on Cameroonian territory, even if it pales against the abduction of 300 teenage girls by the group in neighbouring Nigeria last year. Authorities also said about 80 houses were burnt to ashes, but the figure could be modified when security services complete investigations.

Both the Cameroon government and the Boko Haram group have not only stepped up verbal threats against each other in recent months, they have also increased their activities in the field. The Cameroon government has vowed repeatedly in recent weeks to use all military means possible to crush Boko Haram, which it repeatedly refers to as a terrorist “sect”. The government even went further and invited Chad to deploy troops on its territory to help defeat the militants. The troops breezed into Cameroon in a convoy of tanks and armored vehicles on Saturday, but were not yet in a position to help stop the attacks in the Far North Region a day later.

For its part, Boko Haram recently released a video vowing to intensify its war against Cameroon and threatening the president of the country. Only last week, the group attempted a daring attack on a Cameroon military base, but were repelled by the army, after losing 143 fighters, according to figures released by the Cameroon government. Those heavy losses, however, did not dissuade Boko Haram from continuing its attacks in Cameroon.

Sunday’s incident underscores both Boko Haram’s ability to make surprise forays into Cameroonian territory and its resilience, after years of efforts by the Nigerian government to defeat it, and nine months after Cameroon President Paul Biya decreed war against the group. The fundamentalist group poses perhaps the greatest security challenge to Cameroon’s long-serving president since he survived a coup d’état in 1984.

Boko Haram has mainly focused its activities in north-eastern Nigeria, where it aspires to create an Islamic state, but the group has increasingly exhibited expansionist ambitions, very much like ISIS or the Islamic State in the Middle East.