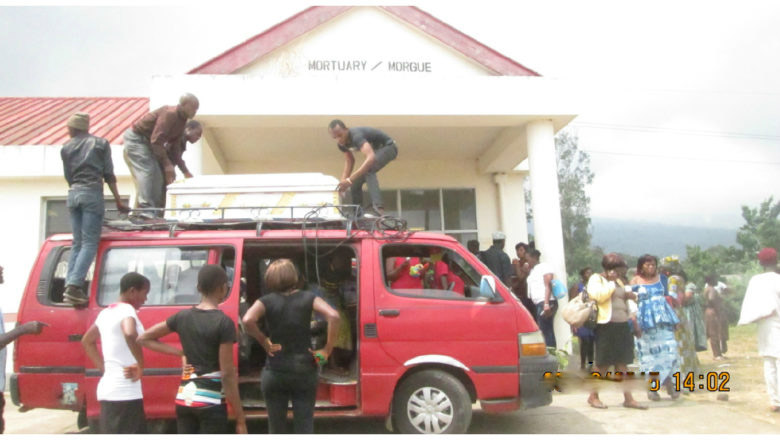 “Our job is becoming more and more difficult. Not only has the mortuary become small, but the typeof corpses that are brought here for preservation are horrible. At times we are forced to go against the laid down norms because certain corpses come here with instructions from above and we are expected to simply obey.

“To make mattersworse, at times the military rush in here, dumps corpses without identification and drive off without sayinga word. We are the ones expected to attend to the unidentified corpses. Things are really getting out of hands.”
These were the words of one of the Mortuary Attendants at the Buea Regional Hospital, whose name we are withholding for fear of victimisation. He spoke in an exclusive interview to The Post at his job site.

Our source also averred that because of the surging number of corpses, they are forced to use unorthodox methods just to be able to meet up with the demand.

Going by the source, the task of Mortuary Attendants at the Buea Regional Hospital is becoming more and more difficult due to the increase in the number of corpses and the lack of space.

The lack of space, our source went on, is due to the continuous massacre of civilians and military in the English-speaking Regions as a result of the on-going Anglophone Crisis.

“The unendingkillings in the Northwest and Southwest Regions are probably themain reason for the saturation of theBueaRegional Hospital,” our source said.

The Mortuary Attendants tale is coming barely a few months after the staff and management of the Buea Regional Hospital raised an alarm over what they termed the increasing number of abandoned corpses in the hospital mortuary.
In amedia outing on Wednesday, May 23, 2018, the Director of the Hospital, Professor Dr George Enow Orock, appealed to the population to come and retrieve the abandoned corpses of their relatives and loved ones.

The Hospital Director said the corpses have to be removed to create space for other corpses in a mortuary that is already too small for the growing population of the Southwest Region.

“We are appealing to the population to come and retrieve their corpses to create space for others; our mortuary is really becoming small for our population,” the Surgeon had appealed.

He equally raised worries about handing over the corpses to the municipal authorities for burial. He said when a hospital decides to take such an action, some ill intention people will one day surfaced in the hospital premises, demanding the corpse of relatives they had abandoned.

The Hospital Director’s May 23outing triggered debate across the Region. Many denizens in Buea accused the Government of the numerous corpses that have flooded the hospital mortuary.

Then, Nicodemus Atoh said: “many people have lost their lives since the beginning of the Anglophone Crisis. Many of them have been killed by security forces and their corpses taken to the mortuary without the knowledge of their relatives. I know of many families who have been looking for their loved ones since this Crisis started. So it is now incumbent on the hospital authorities to assume their responsibility,” Atoh said.

Since the October 16, 2016 strike by Common Law lawyersescalated, followed by Anglophone teachers and the subsequent declaration of war on Anglophone separatists by President Paul Biya, a lot of killings of both the military and civilians have been recorded in the Southwest and Northwest Regions.

This may explained why mortuaries in the two Regions are teeming with corpses.

The Post also learned from a nurse at the Regional Hospital that the hospital has recorded an increase in the number of consultations at the emergency section since October 2016. “Some come badly wounded and end up giving up the ghost,” she said

However, all attempts to get statistics of the number of deaths recorded as a result of the on-going Anglophone Crisis were blocked by the hospital administrators.

When The Post approached the Director of the Buea Regional Hospital to comment on the alarm raised by theMortuary Attendants, Dr George EnowOrock stated that he has made it as an administrative policy not to grant any interview to The Post.

As The Post team stepped out of the Director’s office, a Buea denizen, who has been loitering outside approached them and said: “When I came here to preserve the corpse of my brother in the mortuary, there was no space. I even pleaded for them to put the corpse on another corpse, but there was no way, because corpses were already doubled – about three to five per space. So what they did was dry embalmment on the corpse.”

However, because of the urgent need for a bigger mortuary, The Post learnt that, plans have been completed and work has already commenced on the construction of another mortuary for the hospital.

Meanwhile, as the Crisis rages on, there are fears that the mortuary would remain full every time and fresh corpses would have no space. However, not all the corpses are brought to the mortuary. Reports say some are being buried in the bushes