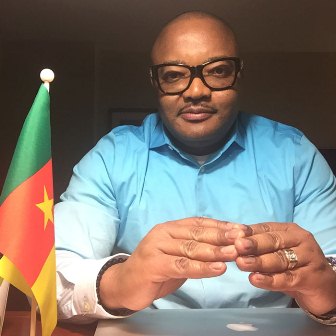 US-based Cameroonian born Dr. Corantin Talla, aka ‘General Schwarzkopf’, who has declared his candidature for the 2018 Presidential Election has been refused travelling documents to enter the country by the Cameroon Embassy in Washington.

Talla, who was co-founder of the famous ‘Le Parlement’ of the Yaounde University in the 90s, and has been living in the United States since 1995, said he has been without a Cameroonian passport since 1993.
According to him, his passport was stolen by an agent from the Cameroon Embassy in Lagos, Nigeria, who was sent to assassinate him in his room at the Lagos University.

He was speaking in an exclusive interview he granted to the French language weekly, Forum Libré, an interview which the Publisher and Editor–in-Chief of Forum, Prince Aristide Ngueukam, shared with The Post.

Talla said he left Nigeria for the United States of America as a political refugee under the protection of the United Nations.
According to him, he entered the US with a document that was issued by the US Embassy in Lagos, within the framework of a programme of reinstallation of refugees under the US Service of Immigration and Naturalisation. But Talla insisted that he remains a Cameroonian.

Dr. Talla, who has been living as a political refugee in the US for 24 years said he wanted to visit Cameroon for the first time since he fled the country in 1992, following serious threats on his life.

According to him, after compiling the required documents for an entry ticket to Cameroon and paid all the charges, his file was sent via FEDEX to the Cameroon Embassy in Washington. “My file was received at the Cameroon Embassy in Washington at 10:18am on March 17, 2016, and a paper was duly signed by the receptionist to acknowledge that the file has been received (tracking number: 7826297355176).

On March 31, 2016, at 9:57am, I received through FEDEX a mail from the Cameroon Embassy, duly signed to acknowledge receipt. But I was embarrassed when I opened the file and discovered part of the documents, including the money order I had sent to the Embassy. The paper I requested to enable me travel to Cameroon was not inside and no reason was advanced why I had been refused the document to travel to my own country.

No reason was also given as to why a part of the documents I sent to the Embassy was withheld.”
Talla said he tried to call the Embassy a number of times, but got no concrete response as to why he was refused the document to travel to Cameroon. “After this, each time I call and the receptionist identify my voice, she would drop the call.”
The former students’ leader did not explain why he did not go to the Embassy to find out what was happening.

To him, the action of the Cameroon Embassy in Washington is a glaring indication that the Biya regime is still scared of ‘General Schwarzkopf’.
Talla said he has not given up his determination to visit the land of his birth and that even the dictatorial regime will not be able to stop him.

The ex-students’ leader averred that one of the things he wants to do in Cameroon is to lay a wreath on the grave of his younger brother who died in 2010.
Another aim of his visit is to begin political consultation on the ground, in preparation for the 2018 Presidential Election.

He accused the Biya regime of corruption, ‘tribalisation’ of the administration, marginalisation of Cameroonians in the Diaspora, gross human rights violation, embezzlement of public funds, among other ills.

Talla says he made a tour of Europe last year to present his candidature to his compatriots and received massive support.
“I have obtained an education, an expertise and professional experience, which coupled with my political experience, will enable me to lead a team of Cameroonian men and women capable of ameliorating the conditions of living, as well as the transformation of our country into a real emerging economy.

Though I have been in exile, I have remained active in the fight for a veritable democracy in Cameroon through lobbying, organisation of manifestations to denounce the ills of the Biya regime and so on”.

On how he intends to be candidate, given that the conditions for independent candidates are challenging, couple with the fact he has no political party, ‘General Schwarzkopf’ said he has two options either transforming the NGO, ‘Conscience du Cameroun’ into a political party or vying as candidate in one of the numerous legalised political parties.

He disclosed that he has already been contacted by a number of young men who are Presidents of legalised political parties, inviting him to join and be their Presidential candidate.