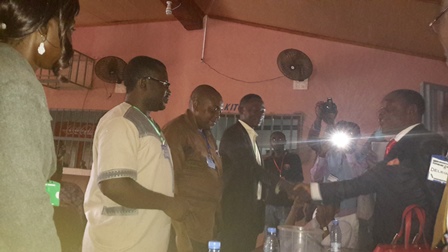 The Cameroon Association of Sports Journalist, CASJ, on August 15, in Kumba, Southwest Region, elected a new executive bureau to pilot the affairs of the association for the next four years.
Barrister Andy Tabi Abang, assisted by the Meme Delegate of Communication, Cynthia Molua, and Fernant Nenkam of CAMRAIL, supervised the elections.

Through secret ballots, Eric Martial Djomo of Equinoxe TV Douala defeated the incumbent President, Emmanuel Gustave Samnick, Publisher of L’Actu with a landslide victory of 44 votes against five.
Meanwhile, Mount Cameroon FM’s Matute Menyoli was elected Vice President by acclamation, since he was gunning for the position unopposed.

It was a similar situation with CRTV National Radio’s Simon Lyonga, who succeeded himself as Secretary General of the association. Charline Flore Demgne of Mt Cameroon FM was elected Treasurer and Happi Raphael Mbiele of Le Sportif and Cameroon Football Magazine was voted Auditor.

In prelude to the election, Barrister Andy Tabi Abang called on CASJ members to exercise patience, clairvoyance and integrity so that the elections would be “transparent more than elections organised by ELECAM. He congratulated the association members for their high level of bilingualism.

Spelliing out the modalities for elections according to the CASJ Constitution, and after a heated debate on whether members who are not in possession of their membership cards should be allowed to vote, it was resoloved that members without membership cards but whose names were on the electoral list, will present their national identity cards to identify themselves and then vote.

Out of the five positions contested for, namely; President, Vice President, Secretary General, Treasurer and Auditor, it was only the post of the President that had two candidates. For the other four positions, the candidates stood unopposed.

At the end of the elections, Eric Martial Djomo from the Littoral Chapter of CASJ, emerged President.
Speaking after his defeat, outgoing President, Emmanuel Gustave Samnick, thanked CASJ members for the support they gave him throughout his stay at the helm of the association. He was, however, optimistic about the way things will be run by the new exco.

“I will like to congratulate Eric Martial Djomo and I hope that he will do well in order to continue to raise the credibility of our association. I pray that the almighty God should give Djomo the ability and wisdom to lead the association.”

Samnick, however, stated that things did not go the way he envisaged.
“It now seems like the Cameroon Association of Sports Journalists is the association of sports journalists from the Southwest and Littoral, that is my only fear,” Samnick said.

He thanked the members of the Southwest CASJ branch for the way the General Assembly was organised.
On whether his successor would deliver the goods, Samnick averred; “I cannot assess him at this moment, but I hope they will work hard. My problem is with the way they have partitioned the positions, it will give us some trouble.

Also, am not sure they have a project and beyond that am convinced that my team and I did a wonderful job to elevate the association, it will be difficult to bring it down now.”
On his part, Eric Martial Djomo said he would not want his association members to slam him a vote of no confidence, like they did to his predecessor.

He said he was conscious of the huge task ahead of him, but was, however, optimistic that, with his team, they are going to achieve their goals.
“I know that I have a great task ahead and that it will not be easy. Fortunately, I have an experienced Vice President, Matute Menyoli, who is my elder brother and I know I can count on him. I can even say that we are two Presidents that will work together to see that this association has a better image,” Djomo explained.

The President elect said his first goal will be “… to bring everybody under the same umbrella and also to multiply the number of training sessions for members of the association and lastly to facilitate the participation of Cameroonian sports journalists in international seminars and competitions in all sports disciplines,” Djomo promised.

In a gala football match after the elections, CASJ lost to All Stars Veteran of Kumba 0-4. The evening was crowned by a dinner at which both teams exchanged gifts.
The curtains of the two-day General Assembly were closed on Sunday August after a tour of the famous K-Town and a breakfast offered by Senator Otte Mofa.