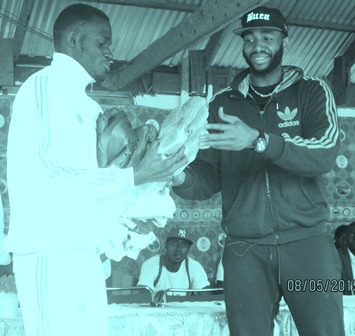 Cameroonian born National Basketball Association, NBA, superstar, Luc Mbaha Moute, was in the Southwest Region last weekend to scout for local talents and bring them into the limelight.

This was the second edition of the Mbaha Moute talent search, after the NBA player last year sent scouts to the 10 Regions of Cameroon to detect budding basketball talents.

For some years now, the Philadelphia 76ers player has been according young Cameroonians who want to make it in basketball the opportunity to realise their goal.

During his stay in the Southwest, Mbaha Moute visited the Catholic University Institute of Buea, CUIB, where he encouraged the students to be hard working in order to fulfill their dreams.

The NBA star admitted that he was not the most talented basketball player or the smartest student, but because of his hard work, he was able to achieve his dreams.

“I have one message for you students and this message is what I always tell all young people. I wasn’t the most talented basketball player or the smartest student, but I worked hard and I listened to my parents, teachers, priests, elder brothers, my friends and everybody that I could get advice from. That is why I am who I am today because I listened. I think God chose me so that I can impact the youths in Cameroon.”

Mbaha Moute exhorted the students never to give up on their dreams despite the odds.
“I’m here today to talk to you about sacrifice and dreams. I have noticed that a lot of young people stop dreaming because of the hardship and other precarious circumstances. But you have to keep dreaming because that was what kept me going.

When I was in the United States there were thousands of people who were fighting to get into the NBA, but the only thing that made me to succeed was that I kept dreaming that I will make it to the NBA. I worked harder and sacrificed. I left my family and went to a different country.

I didn’t know how to speak English, I only spoke French, but I was determined to learn the language and a new culture.

The Philadelphia 76ers forward said the students were privileged to be studying in an entrepreneurial university like CUIB and even have their peers studying on scholarship in US universities.
To him, that is amazing, given that, even Americans yearn for such opportunities.

Mbaha Moute handed over a set of sports wears, basketballs to the CUIB Basketball team and encouraged them to work harder in order to fulfill their dreams.

Earlier in his welcome address, CUIB Student Association President, Bertrand Momou, described Mbaha Moute as a veritable son of the land, who went out there, defied discrimination, made it and is coming back to his roots to tell his success story.

According to Momou, unlike the prodigal son who went and squandered his wealth in a foreign land, the Cameroonian born NBA star is coming to thank the breast that suckled him to greatness.
He said despite the many difficulties, Mbaha Moute did not pay attention to the limitations; rather, he exploited the opportunities behind the limitations.

In what he termed a dream, Momou said he is hoping to see some basketball players of CUIB in a plane on the NBA star’s ticket, a Mbaha Moute’s scholarship scheme or support from the Philadelphia 76ers star for some of their business proposals.

The President of CUIB, Rev Fr. George NKeze, said he was elated to have somebody like Mbaha Moute, whom he admires so much for his positive values to address the students.

According to Fr. Nkeze, it is incumbent on CUIB as an entrepreneurial university that emphasises on positive values to always have people like Mbaha Moute to come and talk to the students and motivate them to reach their goals.

Fr. Nkeze averred that CUIB believes that everybody can fulfill his or her dreams through determination, hard work and sacrifice,“that is why CUIB is not emphasising on grade points for admission, because anybody can become what he or she wants to become.”
It is this drive of training students with a different mindset that the President of CUIB said 12 percent of their students are employed by different institutions, nine percent are self-employed, 39 percent are furthering their studies, while 12 percent have applied for further studies.