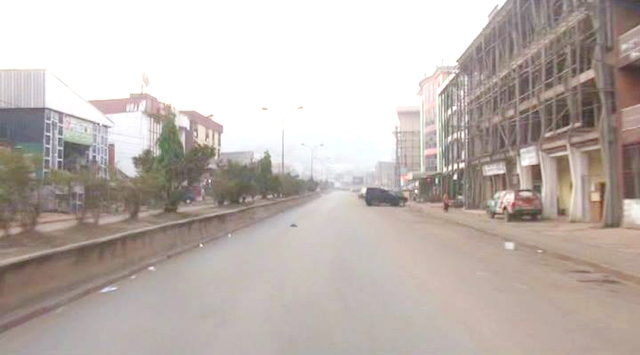 By Chris Mbunwe
The Bamenda City Mayor, Paul Achobong, has castigated administrators and civil servants in the Northwest Regions who do not go to work on Mondays “but are the first to rush to the banks every month end to collect their salaries.”
He said “such attitudes clearly demonstrate that they are Amba supporters and should go and receive their salaries from Amba.”
Mayor Achobong regretted that all Government offices are always closed on Mondays and the population cannot get their documents treated on time.
“This is not fair and beginning January 2021 as we enter this New Year; we must take as a resolution that enough is enough to ghost towns on Mondays because the socio-economic damages for four years have been colossal. People are fade-up with this senseless war. Almost every home has been touched… We cannot keep on living this way. ”
This was the lone message from the Bamenda City Mayor as he crisscrossed Councils holding their budgetary sessions.
He said, starting from the Governor, the SDO and Dos, if their offices are not opened on Mondays to render services for which they are paid, they would be tagged as ambas.
Achobong urged the Councillors of the various councils to persuade those in the bushes and their leaders to come out so that all will use “this season of forgiveness, reconciliation and reconstruction to revive the economy of Bamenda.
“I don’t know the magic your Councils are using in paying your sitting allowances and salaries when the population is not paying taxes,” Achobong said.
Talking in prelude to the December 6 Regional Elections, the City Mayor called on Councillors and Fons to bury their hatchets and party lines and vote those that will take Northwest to another level.
Meanwhile, at every stopover, majority of those who spoke told the City Mayor that most of them don’t open their business premises on Mondays for fear and not that they support ghost towns.
“Our businesses have crumbled, our loved ones killed’; let those perpetrating these arson and killings, including reinforcing ghost towns change their strategy” they said.