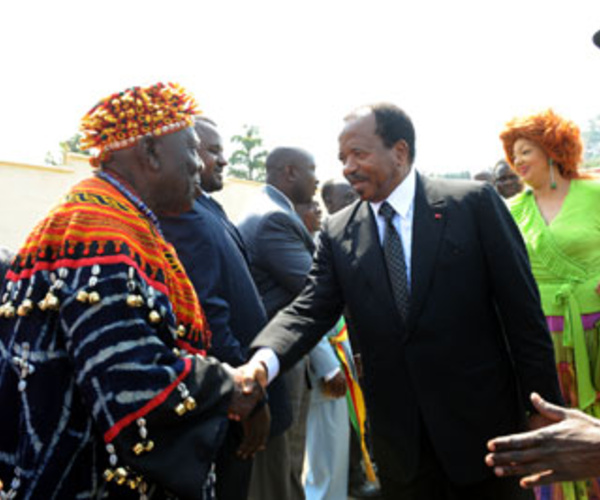 The anniversary of the party he founded 30 years ago, was celebrated on Tuesday, March 24 without President Paul Biya and his deputy, HRH Fon Solomon Anye Ndefru Angwafor III.

Biya, who is currently on a private visit in Europe could not head celebrations in Yaoundé. Neither could his First National Vice President lead the celebrations in Bamenda, the birth place of the Cameroon Peoples Democratic Movement, CPDM. Rumours are rife that both leaders might not be in very good stead to attend public manifestations even though they have been refuted in each of the cases.

The conspicuous absence of Fon Angwafor III, of Mankon was worrying to militants of the party, who had thronged the party’s birth place, the Bamenda Congress Hall, on March 24, to celebrate the 30th anniversary of the party.

Few days to the celebrations, Prime Minister Philemon Yang was in Bamenda to launch the activities of the anniversary, but the First National Vice President and one of the pillars of the party was nowhere to be found.

Since it is worse than a taboo for the Fon’s health to be discussed in public, his colleagues and top party officials could not openly make a statement on the whereabouts of their First National Vice President.

Talking to The Post, the leader of the Central Committee delegation from Yaounde, Prof. Fru Angwafor, said the Fon could just be tired.
“After all, did you not hear his colleague, the Fon of Nkwen speaking on behalf of all the traditional rulers? At one moment, if you are tired, it would be pleasant to sit and watch others put on your shoes and act. So, there is no cause for alarm,” Prof Fru said.
Others, who spoke to this reporter on the basis of anonymity, said since the Fon took ill and was evacuated for treatment in Saudi Arabia and South Africa, and ever since he returned to Cameroon two months back, he has maintained a distance from boisterous spots.

Speaking as the bearer of a goodwill message from the National President of the CPDM, Prof. Fru Angwafor said the opposition in Cameroon is surviving thanks to President Paul Biya, who allowed them to create political parties.

Describing the CPDM as a party of great wine tappers, he said the opposition can only be referred to as ‘buyam sellams.’
“Fons and Chiefs can today boast of salaries to feed their wives and children, thanks to the Chairman of our party,” he said while appealing to adherents to go out and recruit more militants. He warned that the party is not so desperate for crooks, who will come in and stir confusion in the party.

“So, go and fish only clean militants,” Fru reiterated.
He praised the Bamenda population for standing behind Biya and supporting the soldiers in the war against Boko Haram.

Minister Paul Atanga Nji, Section President of Mezam I, said, with the construction of a Referral Hospital in Bamenda III Subdivision in the weeks ahead, the SDF will be chased out of that Council in the 2018 elections.

According to him, not long from now, the opposition will have nothing to offer Cameroonians and after grabbing Bamenda I Council from the SDF, the CPDM is now eying Bamenda III Council.

Atanga Nji said the militants of Mezam I gathered a few months back “just to tell me thank you for all the good things you have given us and promise that anybody who will bar your way in fighting Boko Haram, will be handed to God to be treated accordingly.”

Other speakers like; Miriam Mbah of WCPDM, Cletus Anye Matoya of YCPDM, called on the population to report any suspected person, to the forces of law and order so that Boko Haram can be eradicated in Cameroon.