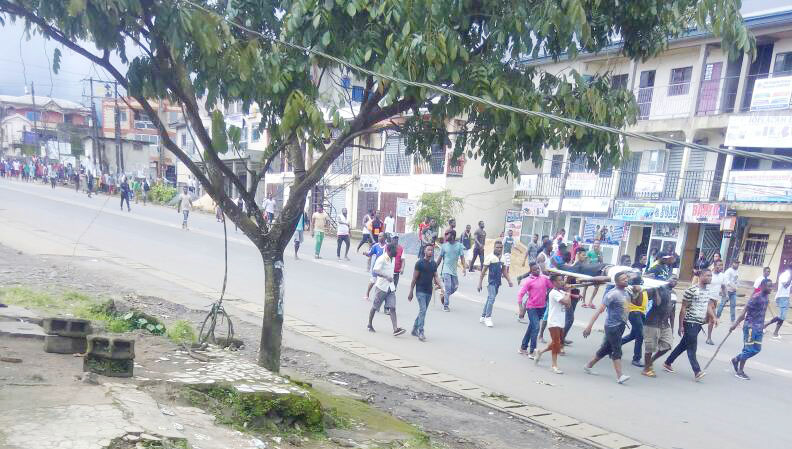 The Central Africa Human Rights Defenders Network known by its French acronym as REDHAC has revealed that at least 100 demonstrators have been killed in the Northwest and Southwest Regions prior to and during the last October 1 protests marking the 56th anniversary of the Reunification of Cameroon.

It notes that REDHAC “is deeply concerned and firmly condemns the numerous and serious human rights violations perpetrated by some elements of the defence and security forces in the Southwest and Northwest Regions of Cameroon prior to and during the protests of October 1, …”

In presenting what they termed “the facts,” the human rights network declared that ”at least 100 demonstrators were killed as a result of the actual live bullets by the defence and security forces and by suffocation of tear gas absorbed in large quantities, including 38 duly identified…” Those killed in Ekona on September 28 and identified by REDHAC include Agu Dinamoh, Abokwa Clif Penda, Ekregi Marchial and Endo Syprain.

Basing on the above facts they presented, REDHAC “deplores and condemns all the utterances by the Minister of Communication, Spokesman of the Government, of the elite of the ruling party, some elected representatives of the people, some administrators and intellectuals who label peaceful unarmed demonstrators (as) ‘terrorists and assailants, cockroaches, rats, dogs.’”

They equally condemned “with the utmost energy the disproportionate use of live ammunition by certain elements of the defense and security forces that give rise to these violations and serious human rights crimes.

Demands that those elements of the security forces that fired live ammunitions causing the deaths of the demonstrators are held accountable before the competent courts.”

REDHAC declared its support to “defenders and activists of the English-speaking regions in their peaceful demonstrations and their claims, which are just and noble.”

They went further and requested the authorities of Cameroon “to immediately release all activists arrested in the context of the Anglophone crisis from October 2016 to the present day; order an independent investigation to establish the facts in order to prosecute the perpetrators of these human rights violations and serious crimes on unarmed demonstrators and populations and to ensure adequate and consequent reparation for these victims.”

REDHAC recalled its January 20, 2017 declaration reiterating the establishment of an inclusive political and social dialogue framework with all stakeholders to resolve this crisis in order to obtain lasting peace in Cameroon.

They called on the African Union to hold the state of Cameroon accountable for its lack of political will to resolve the crisis and undertake mediation with immediate effect. The African Commission on Human and Peoples’ Rights, ACHPR, was told to urge Cameroon respect commitments it freely took in regards to articles of the African Charter on Human and Peoples’ Rights, among other concerns.

The UN was called upon to work in synergy with the ACHPR to set up an independent commission of inquiry for fact-finding investigation so that perpetrators and guilty parties are brought to competent and impartial courts for judgment and punishment as well as for adequate reparations to be paid to the victims by the state of Cameroon.