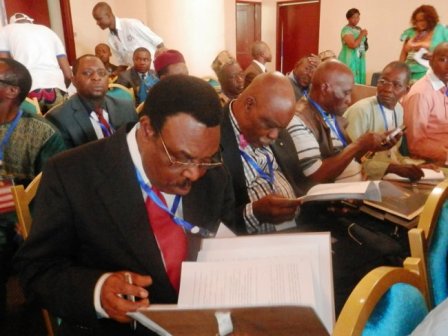 A new dawn has been ushered into the Cameroon Football Federation, FECAFOOT, following the adoption of the new Statutes and Electoral Code of the Federation by the 2009 Elective General Assembly.

After several controversies, intrigues and repeated cancellation of the texts, Delegates from the Regional Leagues in a special General Assembly convened on August 5, under the chairmanship of Professor Joseph Owona, President of the Normalisation Committee, finally adopted the statues of FECAFOOT and the Electoral Code.

According to Article 32; Paragraph 7, of the new Statutes of FECAFOOT, the General Assembly will establish a joint committee composed of representatives of the two antagonistic groups, charged to reflect on contested points of project.

Compared to the last General Assembly held in June, and following the proposal from the commission that was set up, Delegates adopted the Statutes by 97 votes to 2. The following resolutions were made: that the Statutes of FECAFOOT are amended and adopted, that the Electoral Code of FECAFOOT is amended and adopted and that Article 4 of the Special Statutes of Regional Leagues, Departmental and District, is changed.

In a press conference that followed the adoption of the statutes, Prof Joseph Owona thanked the different stakeholders for their understanding and said it is a good beginning for football in Cameroon.
“I want to congratulate the Government and the Court of Arbitration and Sports for their suggestions. The adoption is a good start and I think it is the beginning of the last journey.”

One of the major innovations taken during the adoption process was the fact that the number of Vice Presidents of the Federation will increase from three to five, whereby the Northwest and Southwest Regions will unite to present one Vice President.

According to one of the Delegates from the Northwest Region, Magnus Tafili; “The adoption of the new Statutes is a step towards the construction of football in Cameroon. Football has to prevail because the differences that were brought up by the two camps could not take them anywhere and there was need to come back to the table. If all that is put in place, it is an honour for our football. Football in Cameroon will take its place of pride”.

The adoptions are coming after the World Football governing body, FIFA, had threatened to suspend the country from all FIFA organised competitions, if the Normalisation Committee does not leave the FECACFOOT house by the end of September.

With the adoption of the new texts, the ground work has been laid for the Divisional and Regional elections to follow in the days ahead. This will be followed by the national elections by September 28, 2015.