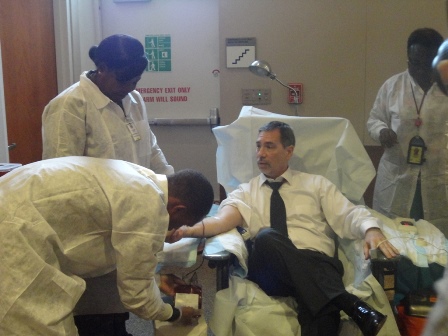 Some Diplomats in Cameroon have demonstrated their support in the fight against Boko Haram by donating 42 bags of blood to victims of the sect.

The blood-driven-support, which took place on June 23 at the United States, US, Embassy in Yaounde, generated the donation of 450 millilitres of blood from each donor.

According to Michael S. Hoza, the blood-driven support initiated by the US Embassy is aimed at donating blood that will be given to the Yaounde Military Hospital to take care of both Cameroon and Chadian wounded soldiers.

“We want to give good healthy blood to these young people who are defending the country and ensure that they have enough blood supply,” he said.

The British High Commissioner to Cameroon, Brian Olley, said by donating blood, he wishes to show his country’s solidarity with Cameroon.

“We are all united for Cameroon and to defend the security of Cameroon,” he said.

To him, the strength of the wounded soldiers will be lifted, if they know that they have the necessary first aid needed for their upkeep when sick.

Applauding the initiative, the Director of the Yaounde Military Hospital, Colonel Abeng Mbo’zoo, said it will help the hospital to have blood of different qualities.

Colonel Mbo’zoo said, out of 1,500 patients received, the Military Hospital has lost just 3 of them. He attributed the success to the various philanthropic gestures and help given to the hospital and wounded soldiers.

“With the US Embassy blood-driven support, the Military Hospital will always have reserves,” the Director said.

He added that the blood support will help the wounded soldiers who, mostly, suffer from severe loss of blood because of the critical injuries they sustain on the field.

He urged people of good will to emulate the US Embassy initiative, stating that it will help the soldiers to quickly recuperate and gain back the strength they need to go back to the field.