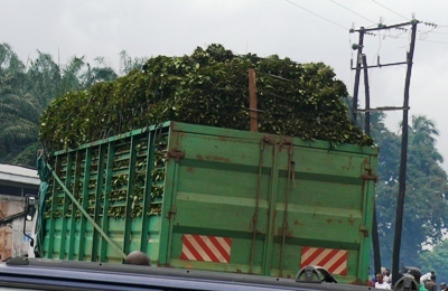 The Chief of Idenau (West Coast) Customs Unit, Senior Customs Inspector, Guy Alain Cheping Simo, has disclosed that the recent drop in the Nigerian currency has adversely affected many Cameroonian who export eru to Nigeria.

Eru is an edible green vegetable found in most of the forest areas of the Southwest, Centre and Eastern Regions of Cameroon.

Many Cameroonians have been making fortunes from this vegetable known scientifically as Gnetum Africanum through exports to markets in Nigeria via Idenau. But the recent drop in value of the Naira seems to have affected the eru business, reducing its demand in Nigeria.

“The drop has affected them very badly because they are not able to export the same quantity that they used to. So they are really suffering,” Cheping Simo said.

During the heydays of the eru business, it was common on Sundays, Tuesdays and Thursdays to see buses or trucks loaded to the brim with the vegetable from Yaounde and heading to Idenau.

Thus, police, gendarme and transport officials had made it a duty to ‘check and control’ the vegetable.

The Customs Inspector suggested that if the eru exporters had a warehouse in Idenau to store the produce when demand in Nigeria drops, it will be of help to them.

He also called for some level of understanding among those who control them on the highways.

As to how the imports sector has affected the business and the economy of Cameroon, he said that the customs sector has witnessed an increase in import duties.

He, however, said the increase has also been as a result of measures that the Chief of Sector for the Southwest, Ali Manga, has instituted to make their work better.

Simo said as regards the preparations towards the Africa Women Nations Cup, they have been instructed to ensure the safety of all fans and guests coming in from the West African countries.

“Fans coming in from Nigeria and other West African countries need not carry any weapons with them. They don’t have to carry a gun, explosive or and detonates,” Simo said.