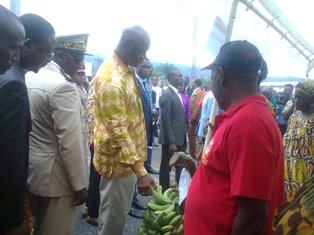 Farmers in Cameroon will, in the weeks ahead, receive improved seedlings of Cassava, palms, cocoa, coffee, Irish potatoes and plantains from the Institute of Research and Agricultural Development, IRAD.

The improved seedlings will be handed over to the farmers following an agreement between the Ministry of Agriculture and Rural Development and IRAD.
The information was made public by the Minister of Agriculture and Rural Development, Lazzare Essimi Menye, on February 19, at the Buea Independent Square, while launching the 2015 farming season in Cameroon.

In order to increase productivity, the Minister exhorted the farmers to engage completely in 2nd Generation Agriculture, while redoubling their capacities in their various production units.
He also said the best way to achieve high yields is through cooperatives.
“We want our farmers to be organised, that is why we have decided to promote the establishment of cooperative societies. For the cassava and maize project which is to start this year. We will work only with cooperatives,”the Minister said.

He assured the farmers that the project is going to be a success, since it is partly sponsored by the World Bank and there is enough cash to bankroll it.
Before officially launching the farming season in Buea, the Minister had earlier installed a milling unit in Muyuka, where cassava will be processed into starch or flour, which will be used by bakeries.
This milling unit, Essimi Menye said, will drastically reduce the importation of flour.

The Minister also announced that a new programme on youth entrepreneurship will take off this year.
“I am calling on young people to join this large agricultural family. We will establish a special unit where we are going to train young people and create what we call ‘Agristators’. This means that when you complete your training, you will be able to start up your own business. There will be subsidies to enable you start your own business,” he promised.
Essimi Menye said there is need to increase the production of palm oil, with efforts geared towards cultivating 10,000 hectares of palm trees yearly. This, he added, will curb the importation rate of palm oil and reduce spending.

“The Southwest Region is considered rich. This has caused the Region to be deprived of some vital micro- agricultural financing projects like the PAPMIL, which the Region was left out of. In fact, the Southwest farmers are still being looked upon as rich in agricultural loan facilities. The Southwest farmers are looked upon as warm, whereas they are shivering in the cold,” Bao stated.
He, however, pleaded with the Minister to support producers with good facilities in the Region.

Reacting to the Minster’s agricultural roadmap in 2015, the Director of Monitoring and Evaluation at the Southwest Development Authority, SOWEDA, Peter Epie Ngalle, said his institution will live up to the expectations of the Minister. He said what the Minister has outlined in his roadmap will be realised.

“He is a practical Minister. He does what he says and does not talk about what he cannot do. He is really out to promote agriculture”,
To a worker with the Project Seedlings of Cocoa and Coffee, PSCC, in Yaounde, Sulpice Bene, the Minister has done his part and it is left for the farmers to go to the farms and execute it.
“He has set the objectives, we now have the obligation to go to the farm and realise these objectives,” he said.

The launching ceremony was crowned by visits to the exhibition stands and encouragement of farmers who came with their agricultural products from the Centre, South, Southwest, Northwest, East, Littoral and West Regions, by the Minister, accompanied by the Governor of the Southwest and other dignitaries.