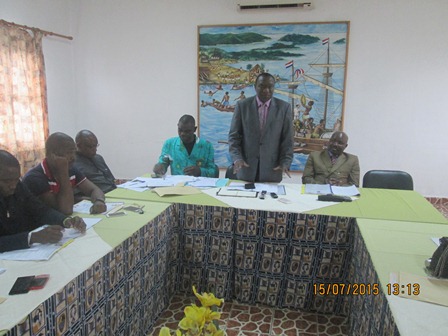 “The decision to adopt the Southwest Regional texts of the Cameroon Football Federation, FECAFOOT, was forced down our throats, because the representative of the FECAFOOT Normalisation Committee made it clear at the beginning of the meeting that, whatever decision we make, the texts cannot be altered, but rather, our decisions will be taken as proposals to Yaounde.

“To make matters worse, Yaounde wrote these texts in French before English and sent to Buea with so many errors on it.

To be honest, the deliberations became a political issue as people began voting base on their party positions and party line, rather than putting the interest of football in the Region…”
These were the words of one of the restive Club Presidents, ‘Shey’ Chrysantus Konso, after the adoption of the Southwest Regional texts of FECAFOOT in Buea on July 15.

According to Shey Konso, with the adoption of the Southwest FECAFOOT text with the numerous flaws in it, there is no hope for the revival of the Regional Championship that has been in the doldrums for years. He said football in the Region may continue to be what it is because the adopted texts, which are supposed to act as a compass for football, are spongy.

“To me, this was a farce and a formality. The law was clearly not respected. The law clearly states that the text shall be sent seven days for deliberation before the eventual day of the adoption. But that is not what happened today. In fact, Cameroon is the only country in the world in which a text is brought in the morning and adopted the same day,” Barrister Balla lamented.

The Club Presidents were split into two opposing camps during the adoption of the texts.
One of the Club Presidents who saw nothing wrong with the text is Rose Tarh, President of Manyu Football Club. According to her, “The text was good for adoption, except for some typographic errors like the case of Article 1 referred to as Article 11, and the few proposals that we made to be looked into.

If this is done, I believe there is hope for Cameroon’s football,” she said.Earlier, in his opening remarks, the representative of the FECAFOOT Normalisation Committee from Yaounde, Professor Ephraim Fru Ngwafor, apologized for bringing the texts that morning, instead of a week before the General Assembly meeting for adoption, as stipulated by the FECAFOOT Constitution.

He also apologised for the fact that, instead of the Regional text to be brought for adoption, it was the Divisional text that was erroneously brought.

“This is an error from Yaounde,” Prof Ngwafor admitted.
However, despite the above shortcomings, the representative of the Normalisation Committee was categorical that; “We have not come here to change any text, rather, whatever is said here will be taken as proposals to the Central Committee in Yaounde for it to be adopted, if need be, or rejected.”
The varsity don was astonished that the list of candidates vying for the Southwest Regional FECAFOOT Presidency has not been published.

Meanwhile, after two hours of heated debates in the in-camera conclave, the 40 texts from the FECAFOOT Central Committee in Yaounde were adopted.

Of the 19 Club Presidents that voted, 11 voted for the adoption of the texts, while eight voted against.

Before we went to press, the Conciliation and Arbitration Chambers of the National Olympic and Sports Committee annulled the June 2, 2015 Adoptive General Assembly of FECAFOOT and, by extension, the Divisional and Regional adoptive assemblies.

According to the Conciliation and Arbitration Chambers of the National Olympic and Sports Committee, the June 2, 2015 Adoptive General Assembly of FECAFOOT did not respect Article 30(6) of FECAFOOT.