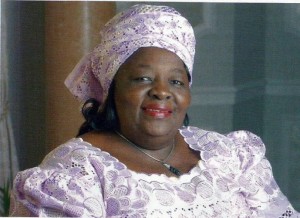 Controversy has sparked off among the Bamileke community in Douala and beyond, as to where the CPDM bigwig and Mayor of Douala V, Francoise Foning, should be buried.
Foning died in Yaounde on January 23, following a ghastly road accident.

The controversy is due to the fact that Foning was not only a Queen Mother (Mafo) in the Chief Palace of her native Bafou, but she also got married to more than one man. Questions are even being raised as to whether she was formally married to her supposed first husband, who is also of blessed memory.

Meantime, some unpleasant information about late Foning’s marriage life that was rarely talked about is now coming out and being discussed in Douala and fueling rumours and debates.
The situation is aided by the fact that, while Foning lived, she persistently evaded talking about her family life in public, except about her parents, especially her late father, HRH Salomon Tsopgny, who was the Paramount Chief of Bafou in Menoua Division of the West Region.

One of the debates is on the exact number of children the late Foning had. The expression being used now is that she had many children. Foning has always lived with many children, mostly extended family members, and rarely called any of them by name or shown any special affection to one or the other. She had the habit of fondly calling each of the children as “my son” or “my daughter.”
Jean Robert Wafo (an SDF Shadow Cabinet member), who knew Foning’s first husband closely, told The Post that late Foning had three children with her first husband, who was of the SDF.

Francoise Nguiazong Tsopgny, reportedly first got married to Nkueté, who hailed from Babadjou in Bamboutos Division, West Region and they had three children. Apparently, the marriage did not go well and they separated. Francoise later got married to another son of the Bamboutos, Foning, who hailed from Bangang Village. But the separation between Nkuete and Francoise seemed to have extended to politics, with Nkuete joining SDF upon the party’s creation, while his former wife, consolidated her position in the ruling CPDM. Foning got into Parliament in 1992 on the CPDM ticket, while Nkuete became the Mayor of Douala V, when the SDF won the Council for the first time in the 1996 Municipal Elections. Francoise was re-elected into Parliament in 1997. Thus Nkueté was Mayor of Douala V and his former wife the MP of the same municipality. However, Nkueté died during his mandate as Mayor of Douala V. Foning reportedly played an active part in her former husband’s funeral, considering especially that they had children.

The controversy over where the late Francoise Foning should be buried, comes on the heels of a general resentment expressed by members of the Bamileke community in Douala and beyond, over a similar situation a few months ago. This was the controversial decision taken when the Mayor of Bangou, Rosette Mboutchouang, who was the mother of Cameroon’s First Lady, died. Late Mboutchouang was instead buried in Mvomeka’a, the village of the son-in-law, rather than in Bangou Subdivision, where the husband, who is still alive, hails. Members of the Bamilekes community generally considered what happened as a terrible insult to the Bamilekes and their tradition.

The same members of the Bamileke community are divided over the debate as to where Foning should rightfully be buried. The Post gathered that, according to Bamileke tradition, when a married woman dies, she is buried in the family compound of the husband. But this tradition is only applied if the man performed the traditional marriage, especially the payment of the bride price. Even if a woman abandons her matrimonial home after the bride price has been paid, and settles with another man, her first husband would still have the right to bury her in his compound.

In Foning’s case, some members of the Bamileke community in Douala alleged that Francoise was Nkueté’s concubine, not wife. Some hold that, going by the Bamileke tradition, if Nkueté paid the bride price and did not get it back after the separation, then, his family has the right to ask that she be buried in their family compound at Babadjou. But if he did not pay the bride price or he got back the money, then, by tradition, she has to be buried in the family compound of the second husband at Bangang. This will, of course, be on condition that the second husband paid the bride price.
Meanwhile, the families of the first and second husbands of Francoise are each reportedly laying claim to the right to bury the corpse. The issue is further compounded by the fact that both the first and second husbands in question had long died, and so, the families left behind might not know certain truths. Nevertheless, both families are being supported in Douala by members of the Bamileke community, who hail from Bamboutos Division and call themselves ‘Mbouda people’. The say it is inadmissible that the wife of a Mbouda man be buried in Dschang.

Also, the current Secretary General of the ruling CPDM, Jean Nkueté, is said to have close family ties with the Tsopgny family, and even partly grew up in the Bafou Palace when late Foning’s father was Chief. His position will, probably, influence the position of the CPDM Party and Government, as well as that of the Presidential couple on the issue.
However, it is not known whether Foning left a will, but many observers think that she did, especially after she narrowly missed death in the first ghastly motor accident in the outskirts of Yaounde in August 2003. Meanwhile, The Post has leant that she constructed her ‘village home’ at Bafou. That definitely speaks for itself.