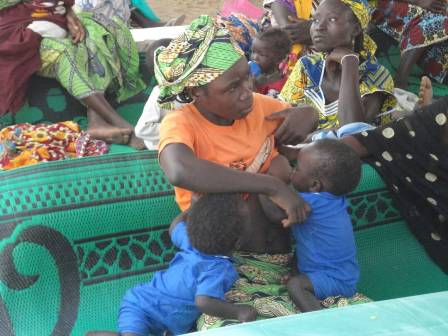 At the entrance into a therapeutic nutrition centre in Mokolo, a town in Far North Region of Cameroon, a 20-year-old mother, Aissatou Bouba, is feeding her two-year-old baby, Ramou, with an F-100 therapeutic milk.

Ramou, whose features betrayed the look of a baby incapable of surviving malnutrition, was actually regaining his strength from the nutritive supplies, going by Dr. Jean Bissemou, a Medical Doctor at the Centre.

Ramou’s mother Aissatou, however told this reporter that she was initially reluctant to bring her sick baby to the hospital because she had no money.
A community health agent, she went on, had told her that the centre will take care of everything, including drugs and food supplies.

Speaking to The Post about Ramou’s situation, a nurse at the centre, Daniel Guedjo, said when he first saw Ramou, he looked terrible, like the leftover of a hunger’s feast.
“This baby suffered from acute stomach disorder due to the consumption of untreated water. He suffered from diarrhoea,” he said.

He used a monitoring circumference arm band to measure the level of malnutrition in Ramou.
The results showed that Ramou’s situation had progressively moved away from acute malnutrition.
According to health experts, malnutrition is taking what the body does not need or consuming food that does not have all the elements that the body needs to function normally in all its components.
In Cameroon, 1 out of 3 children suffer from malnutrition, a recent United Nations assessment has found.

Going by the assessment, the country’s three Northern Regions: Adamawa, North and Far North, with a population of 9 million people are hardest hit, with many children dying from the malady.
This is situation this reporter witnessed in another UNICEF supported health centre in Zamay, still in Maroua. Here, one could see children who had developed Kwashiorkor; a type of malnutrition characterised by severe protein deficiency. Youssafa, a Communication Focal Point at the Zamay centre, who covers 19 villages in the Region, said many children have died of malnutrition and others continue to die from it.

Statistics from UNICEF reveal that 37,114 children with severe acute malnutrition were admitted to 517 UNICEF-supported health facilities in the three Northern Regions between June 2016 and April 2017, with a vast majority of 27,507 of these children admitted in the Far North Region alone.

In order to stem the tides of malnutrition in the Region, UNICEF Cameroon with assistance from the German Government through the KFW-funded Nutritional Crisis Response Project, has been promoting good feeding practices for infants and young children, breastfeeding and complementary feeding.
The UN agency also fights micronutrient deficiencies through food fortification and micronutrient supplementation. It also manages cases of severe malnutrition.

The antidotes include the provision of supplementary, fortified and ready-to-use therapeutic foods. Among its most successful interventions is the training and equipping of benevolent and unremunerated community relay agents currently combing remote villages, conducting early screening and educating people on the need for better nutrition.

UNICEF’s presence in the Regions has been lauded by many beneficiaries of the scheme. One of them, Hababa Abdou, a young mother, in one of the UNICEF-supported health facility in Maroua, praised the organisation for helping to reverse the agonising plight of her 11-months- old malnourished baby.
She hopes other stakeholders would emulate the organisation’s example and list malnutrition among national priorities to kick out across the world.

It is the same scenario for almost all medical doctors in the Region who spoke to this reporter. The medics lauded the intervention of UNICEF in providing free medical intervention for malnourished children and infants.
Most of them say, since the organisation’s intervention, malnutrition-related deaths have considerably dropped from an average of six per month for every thirty registered patients.