Gov’t Cracks Down On Illicit Goods Into Northwest 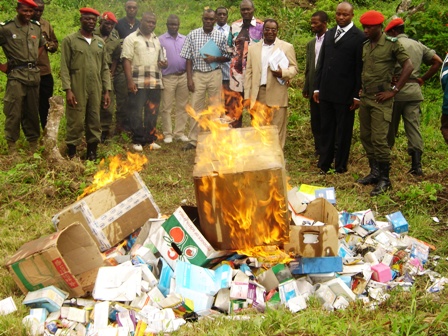 *Drugs Worth Hundreds Of Millions Seized

Volumes of dangerous illicit drugs and consumables of all sorts have been intercepted by the bureau of the Northwest Sector of the Customs Department in Bamenda.

Presenting the illicit drugs and other goods to reporters on August 2, at the custom’s Regional Head Office in Bamenda, the Representative of the Governor, Divine Nkwele Ngome, Inspector General at Northwest Governor’s Office, lauded the Customs staff for the seriousness they attached to the tasked assigned them by the Prime Minister, Philemon Yang, some few months ago.

“Today, we are proud to present these consignment of drugs and other dangerous goods that were confiscated and are being presented to the press, barely two weeks that you launched this crusade against illicit drugs. The results, to say the least, have been encouraging.”

According to Divine Nkwele, the Government has as objective, to ensure she protects the population from consuming illegal goods whose content is doubtful.

“Look at the Tramadol drug, the content of what has been impounded here is an equivalent of over 50 bags of marijuana or what is known as Indian hemp,” he said while advising that the goods be set on fire, not buried in the soil. To him, if the drugs are buried in the soil, the pollution will affect crops and the negative effects will be immeasurable. He promised hell to those importing illegal drugs into the Region.

“We are not very sure of the source of importation. Our mission is to follow the Prime Minister’s instructions by intensifying the fight against illicit drugs and commercial activities in the whole of Northwest,” Nkwele stated.

The Northwest Regional Chief of Customs, William Bollo Emvoutou, said, within their sector, the Director General launched what is now known as ACLOMI – which has to do with total mobilisation of the brigades to fight against illegally imported goods that are dangerous to the health of its citizens.

The Commander of Active Subdivision at the Northwest Customs Sector, Kennedy Acha, said the first truckload of illegal drugs and other consumables they intercepted was heading to Bamenda Town, driven by a certain Emmanuel Fon, who declined, saying it belong to Lontsi Fotio.

“This truck alone had the following content; 20 cartons of cigarettes worth FCFA 4 million, 64 tons of non-degradable plastics worth FCFA 2.04 million, carton of Tramadol of 225mg; cost of the Tramadol estimated at over FCFA 60 million.

The Manager of the Northwest Regional Fund for Health Promotion, NWRFHP, Dr. Richard Mbarika Fondoh, in his analysis, said most of the drugs are of high opium. “The Tramadol, used by young people is carrying 100mg, whereas, the Tramadol we prescribe in hospitals is that of 50mg and, at no one moment, can you prescribe 100mg of Tramadol to any patient. But when these boys take the 100mg of Tramadol, they can commit any crime because of the very high level content that gives them that courage,” Dr. Fondoh noted.

He further explained that the packets are deceitful because the pictures on the packets are showing tomatoes, which make one to think it is a food supplement. The manufacturers are not known, so, they can never be traced.

Concerning the selling of illicit fuel everywhere in Bamenda, the joint team said they have seized over 10,000 litres and handed to the Regional Delegate of Water and Energy.

Illicit goods easily get into the country, because, the borders are porous and where there are Police, Gendarmes or Customs, the trader beats their vigilance or simply buys his way.