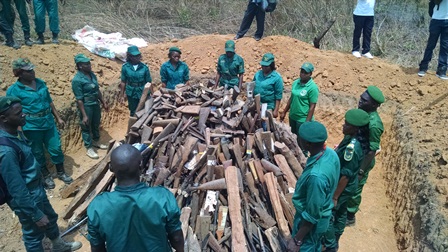 The Government of Cameroon has destroyed 616 guns and 2,713 munitions seized from poachers over a period of five years in the East Region of the country.

The weapons were destroyed in the town of Bertoua from February 14 to 16, 2016, in a ceremony jointly organised by Cameroon’s Wildlife, Defence and Territorial Administration Ministries.

According to a press release signed by the Communications Unit of WWF headed by Fidelis Pegue Manga, assisted by Ernest Njomo Sumelong, the destruction of the guns marked the end of a long process in the fight against poaching led by the Ministry of Forestry and Wildlife, MINFOF, with the support of WWF.
It is the first time in Cameroon that weapons seized from poachers are being destroyed thus sending a strong signal of Government resolve to crackdown on poaching.

The action came at a time when wildlife criminality and proliferation of arms is threatening the country’s rich biodiversity as well as its security.

The Southeast of Cameroon that forms part of the Congo Basin rainforest is particularly threatened as wildlife species such as the forest elephant continue to be massacred by armed poachers.
War guns smuggled from neighbouring countries and the hike in the price of a kilogramme of elephant tusk in the international black market have greatly contributed to the unprecedented rise in elephant poaching.

It is in this guise that the Government, with the support of WWF, has, over the years, waged a ceaseless war against wildlife criminality. Anti-poaching operations over a period of five years (2011 to 2016), has led to the seizure of 616 guns, 2,713 munitions and over 10,000 wire snares in the four Divisions of the East Region namely; Boumba and Ngoko, Upper Nyong, Kadey and Lom and Djerem.

The aim of destroying the weapons, according to the Governor of the East Region, Gregoire Mvongo, is to render them useless, as some of the seized arms were sometimes later found in the hands of poachers, thanks to the complicity of some administrative officials.

Underscoring the importance of the destruction of the weapons, MINFOF Delegate, Djogo Toumouk Sala, said the move is aimed at ensuring the preservation of Cameroon’s wildlife resources by ensuring that the weapons do not end up in the hands of poachers.

On the occasion, the arms, munitions and wire snares were placed in public view and crushed by a caterpillar. Two holes were dug; where the weapons were all burnt and buried.
“We uphold this action by the Government, which is a strong signal that they are determined to continue fighting poaching and also sent a message to poachers,” said Gilles Etoga, WWF Jengi TRIDOM Programme Manager.

“We will also like to see the same determination by Government in ensuring that the wildlife law is effectively applied and defaulters are given deterrent sentences and are effectively kept in jail,” Etoga further asserted.