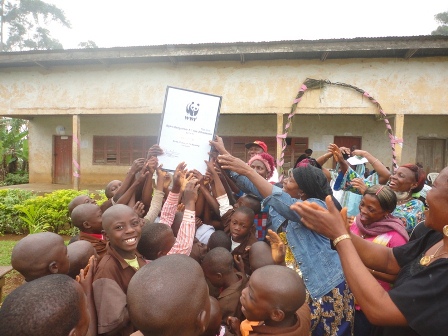 Government Primary School, GS, Nsoung has won the Education for Sustainable Development, ESD, prize.
The prize was handed to the school on April 17 by a team from the World Wide Fund for Nature, WWF Coastal Forests Programme, CFP, Office in Limbe

Nsoung is a little known community located in Manjo Subdivision, some 39 kilometers away from Nkongsamba, the headquarters of the Moungo Division in the Littoral Region.
GS Nsoung emerged the best school in an ESD competition that involved other four pilot ESD schools that WWF-CFP has been working with since 2012, namely: GTTC Bangem, GBHS Nyasoso, GTTC Nkongsamba and GHS Melong.

“We could not just have imagined that we could be standing as winners in front of secondary schools and teacher training colleges in such a competition,” exclaimed the Head Teacher of GS Nsoung, Jean Calvin Tchonang.

The competition was organised by WWF-CFP with sponsorship from WWF Sweden. Following the victory of GS Nsoung, the ESD Coordinator for WWF-CFP, Ekpe Inyang, on behalf of the WWF-CFP Programme Manager, Philip Forboseh, led a delegation to GS Nsoung on April 17 to hand over the award.

Janet Mukoko, the Communication and Knowledge Advisor for WWF; Berghome Lidwina Kinenla, Programme Administrator and Finance Officer and Yvette Mekemdem Mboneng all accompanied Inyang.
The ESD programme was launched on April 18, 2011, in Yaounde and WWF was empowered by the Government to introduce it in schools across Cameroon. The WWF-CFP launched the programme in some nine pilot schools located in the Southwest and Littoral Regions.

ESD was a whole new approach of teaching Environmental Education, ED. Before ESD, ED teaching focused mostly on environmental clubs where students were taught about the environment. Teaching ended often on the blackboards.

But the ESD, according to Inyang, is a “whole school” approach which involves all students, teachers and the entire school community. It is such that teachers have to move environmental education, conservation and the need to protect our environment from mere drawings on the blackboards to the school yard and, practically, teach the students how to plant the trees, flowers, among other things, and how to protect, nurture and use them sustainably for the benefit of all now and in the future. In all, ESD means blending practice with lessons on environmental protection and conservation and the importance of it all to mankind.

After four years of working with the pilot schools, Inyang said, the competition was launched as a way of motivating the schools. The competing schools, he added, had to practically demonstrate what they have been able to do as far implementing ESD in their school environment is concerned and how this has impacted their various communities.

GS Nsoung was one point ahead of first runner up, GBHS Nyasoso.
Applause and shouts of “thank you WWF” rented the air as WWF’s Lidwina disclosed that the award was accompanied with a cash amount of some FCFA 1.4 million.

“After this ceremony, the Head Teacher and the PTA President (Celine Soppi) shall come to Limbe and cash this money and come back to school and start doing what it is meant for,” Lidwina said.
GS Nsoung’s school yard is a piece of environmental beauty. Close cut lawns, hemmed by a beautifully manicured flower hedge, leaves no one indifferent. No single trash is seen anywhere. The pupils have been taught to take every little bit of trash to several WWF-offered trash cans that are evenly spread around the campus.

Dieudonne Tchakoutio, one of the teachers, Basile Ekonde, the ‘Prime Minister’ of the Pupils’ Government and the rest of the pupils, demonstrated in songs, poems why they came first.
They defined ESD as “Enough for All and for Ever.” When one cuts a tree, one should plant three more so that there would always be a tree for all and forever.

The Sub-divisional Delegate for Basic Education for Manjo, Motto G., thanked WWF for its ESD drive and such an unprecedented award.
“The prize awarded to this school is like a stimulus to other schools around, she averred.