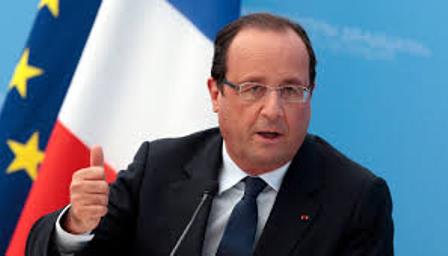 *It Will Be 16 Years Since A French Leader Last Visited…

French President, Francois Hollande, will pay an official visit to Cameroon on July 3. According to Government sources, the visit will be a four hour-sojourn from 5pm to 10pm on that Friday.

Readers of the Franco-Cameroonian relations state that Hollande’s visit to Yaounde is ground-breaking. It will be the first time a French President is setting foot on Cameroonian soil in 16 years for an official visit.

It was on July 1999 that the then French President, Jacques Chirac, paid an official visit to Cameroon where he also visited Garoua from Yaounde. President Jacques Chirac equally attended the France-Afrique summit in Yaounde in January 2001.

In order to keep the diplomatic relations between the two countries on the upbeat, President Biya has been to France many times in the last 10 years for both official and working visits.

Besides, President Biya, who studied in France, was in Paris in October 2007 and January 2013 for working visits. The Cameroonian President also attended the Nice Summit on the French National Day, July 14, 2010. President Biya was also part of a security summit in Paris on May 17, 2014 from where he declared war on the terrorist group, Boko Haram.

Besides the colonial and historic ties that Cameroon has with France, the French President’s visit is staked in many ramifications.

For one thing, Hollande is coming to Cameroon at a time that diplomatic relations between the two countries have of late been facing declining fortunes.

Both countries have been entertaining an arm’s length relationship hinged on mutual suspicion since the coming of the former French President, Nicolas Sarkozy.

From the look of things, Hollande took the relay from his predecessor by treating President Paul Biya with thinly-veiled scorn as one of the leading African political Methuselahs and sit tighters.

Until the visiting French Foreign Minister, Laurent Fabius and the French Ambassador to Cameroon, Christine Robichon, took turns to refute the allegations, France was also being stigmatised in many circles as one of the countries sponsoring the Boko Haram attacks in Cameroon.

It is in this perspective that observers say that Hollande may be coming to Cameroon in a bid to redeem the Franco-Cameroonian relations that are fast sinking into the abyss of apparent mutual mistrust.

Apart from this perspective, the French economic interest in Cameroon is overwhelming that it needs to be protected.

Going by official statistics, Cameroon is France’s first trade partner in Central Africa after Gabon if petrol is not considered. Moreover, Cameroon is the second supplier of goods to France in the Sub Region after Congo.

Before China overturned the tables about three years ago, France was enjoying a strong balance of trade by being the first supplier of goods to Cameroon.

It now comes in the second position. France is one of the three main countries that heavily invest in Cameroon. The two others are the United States and Malaysia.

Besides, French businesses in Cameroon go the whole gamut from Orange Cameroon, the cement-producing company, CIMENCAM, to agro-food and telecommunication industries.

It is reported that about 200 small and medium size enterprises are owned by Franco-Cameroonian business people. The French business empire, the Bollore Group, is calling the shots in the railway sector and the Douala seaport in Cameroon.

France is one of the first countries that came to Cameroon’s rescue through its Debt Relief and Development Contract programme, known as C2D.

This was when Cameroon reached the completion point of the Heavily Indebted Poor Countries Initiative, HIPC-I, in 2006. The first phase of C2D ran from 2006 to 2011. The second phase that started in 2011 ends in 2016.

It is hinged on agricultural, rural, infrastructural and urban development. The French Development Agency has bankrolled many projects in Cameroon, including the second bridge over the Wouri and the Lom-Pangar dam.

The French Prime Minister, Francois Fillion, has stated that Cameroon is France’s first partner in issues of security in Central Africa. All these stakes, analysts hold, make Cameroon and France unavoidably partners.