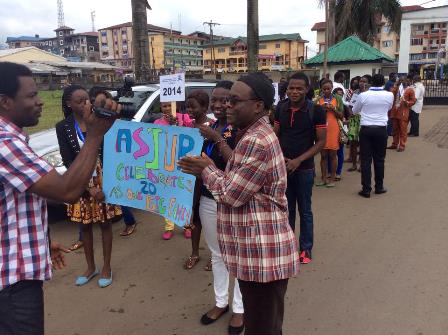 “I see a lot of hope for this Department. I am 100 percent satisfied that today, Journalism and Mass Communication, JMC, Alumni of the University of Buea, UB, are here to give back to the Department that greatly nurtured them”.

Prof. Enoh Tanjong, one of the programme’s architects was speaking on Saturday, June 20, in UB, during commemorative activities marking the 20thAnniversary of the Department.

According to the Communication Expert, students of the Department will soon be receiving more effective practicals.

“I am contented because I have seen things happen from very minute modest actions to great successes. Take the media landscape in Cameroon, on Luncheon Date; nine out of 10Anchors are JMC’s products. They spread across the various communication platforms in Cameroon and beyond.

This is our dream come true,” Enoh stated.
Another JMC founder, Mrs. Bertha Ndoh, said she was very fulfilled with the products of the Department.

“I think JMC in UB is a pace setter. I have my students in the print, TV, radio and other big companies, doing very well for themselves. I am more than a star, which I always wanted to be because everywhere I go, my students are there. I feel fulfilled,” she averred.

Going by Franklin Sone Bayen of the 1994 class and now a newspaper publisher, JMC is not only a theory, but an effective practical school. He said JMC has registered great successes and achievements between 1994 and now.

“The notion of ‘JMC as a family’ was there during our time, but the present camaraderie is so impressive. JMC has produced top communication gurus who are scattered across the globe, and I know when the new equipment will be brought out of the fund-raising, the Department will go places,” Bayen stated.

Another Alumni, Anne-Chantal Bessong, current Political Projects and Programmes Officer at the British High Commission, said her vision for the Department in a decade is for it to become a school of Journalism and not just a Department.

“It doesn’t mean the Department is going to cut off from UB, but it is going to move above the level of a Department and even that of a Faculty because, it is already diversifying itself and needs that capacity to spread. Being a school would open a lot of opportunities for the old students to bring back knowledge and nurture the younger ones,” Bessong suggested.

Rev. Gustav Ebai of the 1999 batch said, “Technology has advanced so fast than what we use to have. We didn’t have a proper production of a newspaper. Even the content has changed.

The students now have the chance to do better than we used to. They now have huge Alumni to fall back to and be easily employed, like some of them come to me.

The Alumni has a huge role to play. It can help build more classrooms and a modern studio, which is possible, looking at the number of students the Department has trained. With this, JMC can serve as a stepping stone to the media in Cameroon.”

At the occasion, Prof. Kehbuma Langmia, gave a talk on Journalism in the Era of Convergence. He noted that we are at a time when all things are coming together in the communication platform.

Therefore, today’s communicators must be ‘Jacks of All Media Trades’, that is print, broadcast, public relations, advertising, research and in all spheres of social media.

He challenged JMC products to have a rethink on the role of convergence.

“Has convergence come to redefine or compliment journalism? What is our role in the converging process as all technology is from the West?” These were the questions he left for individual assessments.
“Communication should be ‘communicology’, that is, it should have a bottom-top approach.

Let us contextualise journalism. The only way we can be meaningful in this era of convergence is through the social media, without which we will remain fragmented.

This will make the saying, “we are in a global village true, because right now, we are in a Western village. In fact, we are in a cosmopolitan chaos,” he stated.

The Head of Department, HOD, Dr. Julius Che Tita, on his part, thanked the Alumni for their massive turn out, adding that his joy has always been for his students to be great people tomorrow.
He promised the introduction of professional Masters Degree in Corporate Communication by December this year.

“JMC is specialised in print, broadcast, advertising, public relations and research, but today, it is moving towards the social media”, the HOD reemphasised.

During the celebration, close to FCFA 1,000,000 was raised and a number of pledges made. The money as indicated in the Anniversary’s objective will be used to purchase and equip the various labs with up-to-date equipment, especially the radio and TV labs for effective output.

The occasion was spiced by choral music, drama and debate by the current batch. It was later followed by a gala night.
Meanwhile, on Friday, June 19, there were football matches pitting the Alumni and the current batch of students and a march-past by the different batches.