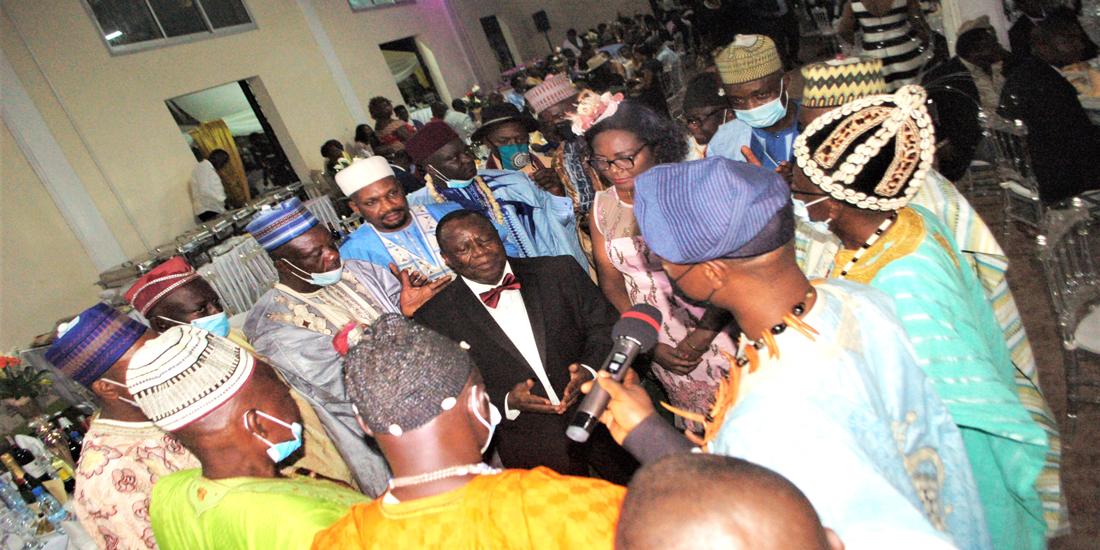 The newly installed President of the Judicial Bench of the Supreme Court of Cameroon, Chief Justice Joseph Fonkwe Fogang, says they will take the bull by the horns and reduce all judicial delays, because justice delayed is justice denied.

Chief Justice Fonkwe made the statement, November 19 in Yaounde, shortly after he was officially installed into his new function. The first President of the Supreme Court, Chief Justice Daniel Mekobe Sone, conducted the installation.

Fonkwe was installed alongside other Presidents of the Bench who were appointed last August 10 by President Paul Biya.

“I am very grateful to God who has always given me numerous blessings and the next person I should extend my gratitude to is the Head of State, President of the Republic and President of the Higher Judicial Council who appointment me.

“By renewing his confidence in me, I think he wants that I should use my talents, my bi-jural nature and render justice to all Cameroonians on both sides of the Mungo,” Chief Justice Fonkwe said.

He added: “I have made a few weeks in the Supreme Court and I see that there are a lot of cases. I want to stress on rendering good judgement. I think, this is the level where the stress should be, on good judgement and not on quantity as Chief Justice said in his speech. There are so many cases on stand-by and we want to take the bull by the horns and reduce all judicial delays because justice delayed is justice denied.”

Speaking during the installation ceremony, Chief Justice Mekobe Sone urged them to carry on their work with diligence and ensure that Cameroonians get fair and balanced trials.

In another ceremony shortly after the installation of the appointed officials, some nearly 300 young magistrates from three promotions of the National School of Administration and Magistracy, ENAM, including those for the Common Law Section and Auditors, were absorbed into the judicial core.

In this segment that took close to three hours, Chief Justice Mekobe, alongside the Procureur General, Luc Ndjodo, respectively, told the young magistrates to strictly observe the fundamental pillars of justice and the requirements of the body of the judiciary.

The two solemn ceremonies were attended by the Minister of State, Minister of Justice and Keeper of the Seal, Laurent Esso, the President of the Constitutional Council, Clement Atangana, alongside Government dignitaries and diplomats.

At a reception after the Supreme Court event, offered by the Fonkwe’s family and the people of Lebialem, young magistrates from Lebialem were urged to work hard without complaining.

Calling on those who have joined magistracy to gain some financial fortune to use the exit door, he added: “You should know that every ill-gotten franc or illicit gift that you seized from a litigant is at the cause of some poor or innocent victim’s liberty, freedom, right or entitlement. Mind you that the cries of those victims of abuse reach God’s ears directly.”

“Exodus 23:8, says, you should not take bribe, for, bribe makes you ignore something that you see clearly and makes the righteous twist the truth,” Chief Justice advised.

“You need to take the job as a vocation and not a profession. I advise you to be hard-working and distinguish yourself professionally. Be like a good tree that stands beside a running stream that bears fruits in and out of season. Because of that, you will receive stones and sticks from those who want to harvest your fruits. Those stones and sticks may hurt and wound you, but they will not stop you from bearing fruits.”

“Let me also remind you that a magistrate’s job is a very ungrateful one. Don’t expect anyone to show you gratitude for doing your job. It is to the law and your conscience that you are answerable.”

“I urge you to work hard without complaining and looking for intervention wherever you are sent to work. Go there and do your best. Whatever you are asked to do professionally, please, do it and do it to the best of your ability. Always remember the oath that you took,” he added.

To the Lebialem Community: “I want to seize this opportunity to tell parent, spouses and family members of these children that they should not make too many financial demands that will push them to indulge into corrupt and dishonest practices.”

“…We are bound to love and tolerate each other. Looking at the trend of events in the world, at large, and in Cameroon, in particular, we shall either help each other, team together and survive or we shall all drown. We must be each other’s keeper. My plea is that we should stop the self-destruction practice of push him or pull him down syndrome. To those PhD specialists, I say you don’t grow by pulling down others; rather, you grow by helping others grow. If you want to go far, move in a group and I am convinced that Lebialem wants to go far.

“I urge traditional rulers to publicly denounce, expose and condemn any of their subjects who is preaching and practising the push and pull him down syndrome. We have too many resources that we can’t waste because of backstabbing, blackmailing, greed, envy and hatred,” he said.

Speaking during the reception, Paul Tasong said: “We are here to celebrate success, humility and share blessings on how God listens to his own. I wonder if I am qualified to talk about Chief Justice Fonkwe whom we celebrate tonight. I definitely don’t have what it takes but, personally, I consider him as an embodiment of some of those rare special virtues that are only held by people who have received special consideration from the most high.”

The Fons of Lebialem thanked the Head of State for, once more, putting his trust in yet another Lebialem elite in the name of Chief Justice Fonkwe.

As peace-loving people who, in their majority, have stood firm against the minority of their own brothers and sisters who have erroneously chosen to take up arms against the State, the Fons promised unreserved support to the Head of State.

“We the Fons of Lebialem are thankful to the Head of State for putting his trust in yet another Lebialem elite in the name of Chief Justice Fonkwe. This reception is aimed at thanking the Head of State for such an appointment. The ceremony has come to add to the list of ceremonies the Lebailem people have held to celebrate good news in the Division,” the Fons said.