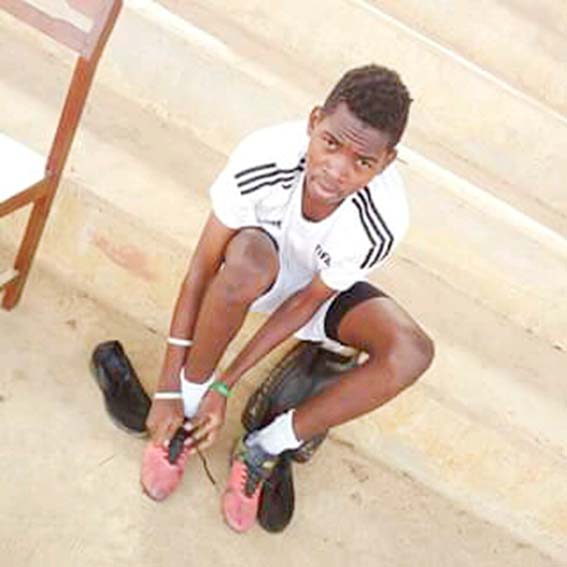 16-year old, Christian Kemssu, a naturally gifted soccer player, is likely going to be Lions Striker, Samuel Eto’o’s replacement in the Lions’ den and beyond.

The tall, gangling, left-footed ball juggler, is one of the most promising strikers in Cameroon’s domestic league, and has broken another record as the youngest Elite One champion in the history of Cameroon football.

The 16-year-old striker, now plying his trade with legendary Coton Sport FC, has gone into history books as the youngest player to have emerged as champion in Cameroon’s top flight championship, Elite One — a brilliant achievement given the number of years it takes for a footballer to reach such high levels of performance.

Playing upfront does put a lot of stress on the muscles, and it requires a nutrient-rich diet and muscle recovery supplements (such as those available on steelsupplements.com) to increase the chances of remaining injury free. That is because most attacking players don’t get to see much of the ball, and often have to make forays into the opposition half in sheer anticipation. Yet others have to contend with strong tackles and body checks from defenders.

The striker, currently on a four-year contract with Coton Sport, has had a trail of successes in his young football career. On his own, the brilliant left-footed attacking midfielder and striker, has proven to be of exceptional talent, given a track record of his exploits in the different teams he has played with.

Prior to his joining Coton Sport, he played for Poumié FC, where, before his departure, he was crowned best player in the Divisional League. He also received the trophy for the highest goal scorer in the Mfoundi Divisional League, all in 2017.

Soccer pundits are already predicting that, Kemssu, if harnessed well, will be a perfect replacement of Samuel Eto’o.
His exploits attracted a lot of attention and bids from a wide range of clubs in and out of the country.
Among the various teams who vied for the young striker, Cameroon’s most prestigious team, Coton Sport succeeded and awarded him a four-year contract, where he now plays.

Born on November 04,2001 in Yaounde, Christian Kemssu, 1m.94 in height, happens to be the son of the ex-professional player, Fernand Taninche.

Kemssu was trained by Poumié FC of Yaoundé where he did spectacularly well and left the side when the applause was highest.

According to his father, Taninche, So many European clubs are scrambling for his son to pen down a contract with them.
Taninche Fernand, also expresses gratitude to the entire management of Poumie FC and Coton Sport of Garoua for projecting his son’s soccer prowess to the lime light.

Kemssu, can be reached for more details and deals, through his public relations officer, PRO, mbunocent@yahoo.co.uk, and on phone through +237 675190446