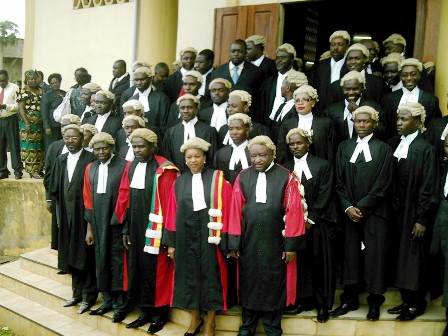 Lawyers in Cameroon, under the Cameroon Bar Association, will on November 30 to December 4 carried out a nationwide strike.

Going by the three-page document, signed by the acting Bar Council President, Barrister Claire Atangana Bikouna and the Bar Secretary-General, Barrister Phillipe Olivier Memong: “Members present unanimously call for a nationwide strike from November 30 to December 4, 2020, during which no lawyer shall attend court,” article two of the resolution stated.

Article three stated that members present suspend, until further notice, the appearance of lawyers on criminal matters in all the courts throughout the national territory, including the Supreme Court and the Special Criminal Court.

The appearances of lawyers in all courts dealing with electoral disputes, including the Constitutional Council, are also suspended after the nationwide strike action referred to in Article 2 above.

Meanwhile, judicial honours for the late Bar President, Barrister Charles Patie Tchakoute, initially slated to take place at the Court of Appeal of the Littoral Region, Douala, and the Supreme Court in Yaounde, has been cancelled.

According to the Bar Council, the said judicial honours shall take place in a different location, more accommodating to lawyers, which will be communicated later.

In the meantime, lawyers have been urged to, more than ever before, be calm, cautions and vigilant in order to avoid provocation and violent confrontation at the risk of falling into the multiple snares designed to weaken the Bar, particularly at this difficult moment when they have lost and preparing to bury the late Bar President.

The Bar Council, besides ensuing measures and without prejudice to any other subsequent measures to be taken, including the convening of a protest Extra-Ordinary General Assembly and, until an end, push for the release of all lawyers in detention, on the one hand, and in a bid to revamp the tarnished image of the profession, on the other hand.

Going by a statement from the Bar Association, two Douala-based lawyers, Barristers Richard Tristel Tamfu Ngarka and Armel Kemmegne Tchuemengne, eyewitnesses of the brutality that went on in Bonanjo Douala, were arrested and detained.

They are said to have been, without prior summons, or warrants, waylaid and apprehended by elements of the judicial police of the Littoral Region and charged with insulting a Magistrate, destruction and commenting on a matter, which is sub judis.

The lawyers were detained from November 18 to 20 and later remanded in custody by the State Council of the said court. They are to be tried under the flagrante delicto procedure on Monday, November 23.