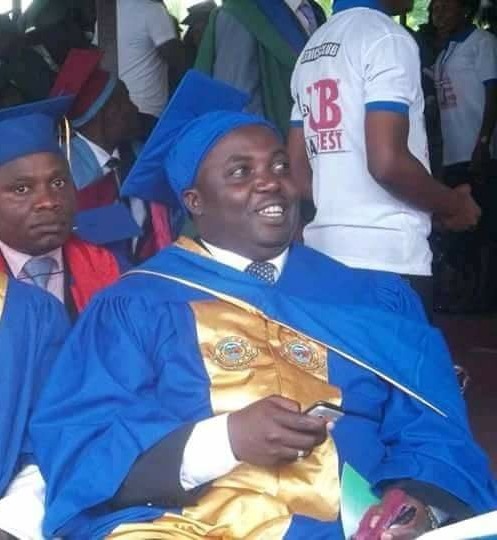 The matter of Buea Mayor, Patrick Ekema Esunge, suspected to have forged certificates to be admitted into the University of Buea, UB, is virtually headed for the law courts.

Police investigations have been completed and the file is presently before the Attorney General who requested the probe upon a petition lodged with him.

The investigations have been concluded just when the University of Buea Senate has resolved to strip Patrick Ekema Esunge naked of academic robes donned on Bachelors Degree and a Masters Degree. The UB Senate decision came after a sitting following findings of a committee that was set up by UB Vice Chancellor, Prof. Horace Ngomo Manga, to probe into the matter.

Only one person tried to speak for Ekema, but the decision of the 73rd Senate of UB prevailed and was sent to the Minister of Higher Education and Chancellor of Academic Honours to revoke the UB Degrees conferred on Ekema. Decisions by the Senate, which is the highest organ of the varsity, are non-appealable.

On November 14, 2017, after our publication on Mayor Ekema’s fake certificates, Christopher Tambe Tiku, the Regional Secretary of the NCHRF filed a petition to the Southwest Attorney General titled: “Allegation of Fraud by Mayor Ekema Patrick Esunge.”

The petition reads: “I have decided to avail myself of the Criminal Procedure Code which enjoins anyone having credible information relating to the commission of an offence to bring to the attention of the Judiciary. The Mayor of Buea, Ekema Patrick Esunge was engaged in an academic fraud by introducing fake certificates to earn admission in the Department of History, University of Buea.”

Tambe Tiku goes further to state that: “It is important not to under-estimate the gravity of the offence of academic fraud… It discourages potential students from going to school and working hard, leads to loss of respect for authority and Government and is inimical to public administration.

“The Mayor’s conduct is to be deplored; he did not succumb to sudden temptation and then resist. He participated in the offence in a cynical manner. The Mayor unjustly enriched himself at the expense of the University. The University must reclaim all undue earnings to restore confidence in the rule of law.”

Upon receipt of the Tambe Tiku memo, the then Southwest Attorney General, Justice Emile Essombé, On December 7, 2017, sent a memo to the Chief of Regional Division for Judicial Police, Southwest, titled: “Transformation of a Letter of Information.”

After forwarding the information from Tambe Tiku, the Attorney General wrote to the Southwest Chief of Judicial Police: “You are requested to conduct a swift investigation on the facts denounced therein and alleging the submission of fake certificates by Mr. Ekema Partick Esunge for his admission in the Department of History of the University of Buea. Upon completion of your findings, the outcome should be returned to my Legal Department.”

Meanwhile, following the allegation of fake certificates and a demonstration by students requesting Degrees awarded Ekema to be withdrawn, UB VC, Prof Ngomo, setup a committee to conduct a probe.

The committee reportedly found out at the level of the General Certificate of Education, GCE Board, that Ekema registered the GCE Advanced Level seven times and actually wrote four times but got only an ‘E’ Grade in History each of the times. Ekema was expressly invited for explanation and clarification but he snubbed the committee.

Back in UB, the committee searched for the application file which Ekema submitted for admission but could not find it. The committee sought for the soft copy and, bingo!!! Against Ekema’s name was entered “AL French – C and History E”, but GCE Board records did not have that.

Meantime, minimum requirement for admission at UB is two papers in one sitting or at least two papers in two sittings with ‘C’ grades. This was not the case. It was thus established that Ekema fraudulently got admission into the prestigious institution.

In our own prying, which took us to several quarters, The Post could not lay hands on the supposed ‘A’ Level document Ekema used or the file. It is apparent that after the fake certificate story was published last year, and further investigations opened, he or his sympathiser quickly went and withdrew it.

However, if the matter finally lands in court, the onus would be on him to show the ‘A’ Level document which he presented to secure admission at UB.

Many observers hold that in a country where the rule of law prevails, all what Ekema earned predicated on the fake certificates would be refunded.

Tambe Tiku, Human Rights activist told The Post after the UB Senate resolution: “The State should have an interest in the matter because he introduced fake certificates to be raised from Category 7 to Category 8 and earned money at that level. The State should ask for a refund without prejudice to the criminal charges.

Forgery And The Law

Section 132(2) states that the penalty becomes imprisonment for from one year to six years where the offender is a public servant.

There is no provision for payment of fine as punishment in this section of the Penal Code.