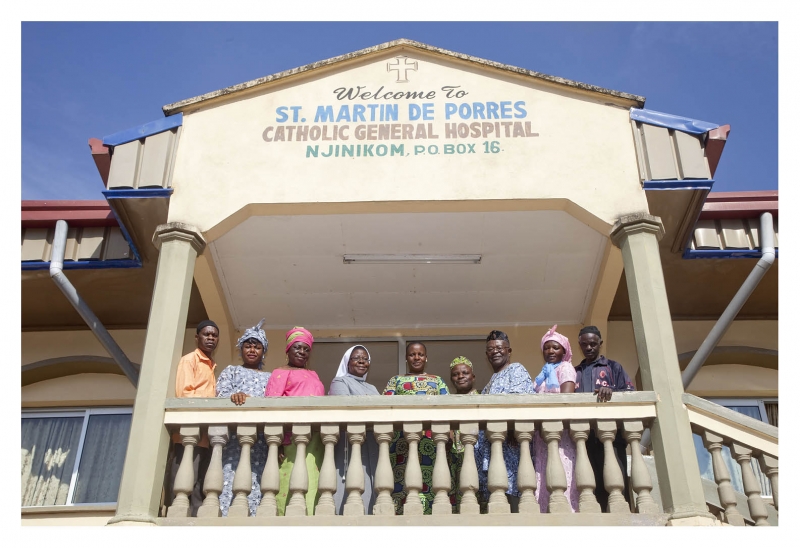 Speaking on Tuesday, November 14, in the presence of the administrative, municipal, traditional and religious authorities, the Member of Parliament for Njinikom and Belo Subdivisions, Hon. Evaristus Njong Ndim, regretted the unfortunate incident and urged his people to exercise restraint and stop the blame game.

According to him, the population should be part of the solution, given that genuine dialogue has been convened by the Boyo administration to probe into the matter.

“The truth, which we cannot deny, is that the Njinikom Catholic General Hospital is owned and managed by the Franciscan Sisters, a charitable organisation. The truth is that this hospital was constructed by the Church, we participated in it and we are part and parcel of the hospital.

It is equally true that the Government of Cameroon and other partners have been assisting in funding projects in this hospital. As such, we must become a solution, not a problem in this crisis.

“Mistakes have been committed at all levels, that is why the Archbishop told us that he is sorry for what happened and had to suspend the activities of the hospital. He will surely open the hospital within three days if we present our proposals that will lead us to operate in peace…,” Hon. Njong said

On his part, the Mayor of Njinikom, Terence Chah Bam, said if the crisis was tactfully handled, it would not have degenerated.

He condemned all those who want to give Njinikom a bad name to hang it.
“We want the world to know that nobody beat or molested the Matron of the General Hospital Njinikom, Rev. Sister Marie Olive Ngah, nor the Archbishop. So many telephone calls have kept us restless. Nobody rough handled them,” Mayor Chah Bam averred.

The Mayor regretted that the population had given their all, including local labour to the Catholics in Njinikom from time immemorial, yet, the very population have not been well treated by the church.
Hear him: “The Catholic Church in the Northwest started in Njinikom. They brought the hospital, we were receptive and we treated them well.

Why is it not reciprocal? When talks went round that hospital equipments were moving out of here, people cried foul and nobody reacted. Look at it today. The question is: why this action of depriving the hospital of equipment is alarming only now with the current Matron?” Mayor Chah Bam, fumed.

The Senior Divisional Officer for Boyo, Fidele Tegni, warned that emotions should not becloud reasoning in finding a lasting solution to the crisis.

“We are facing enough insecurity crises in the Region and people should be very careful with what they post on social media, even our local journalists, should watch out on what they broadcast or publish as news. News should only be based on facts and to tell the truth. Some people who did not verify their facts went and said the Matron and the Archbishop were beaten, which is not true,” the SDO said.

According to Tegni, it was based on the misinformation that he has convened a crisis meeting in his office in Fundong to resolve the problem for the hospital to resume its activities.

“I believe in Njinikom intelligence and I am hopeful we will come out of the crisis,” the SDO stated.
From one speaker to the other, the people denounced xenophobic tenets.

“We are not against Banso people, because our brothers and sisters are working and living in Bui; we are against an individual who is accused of wrong-doing,” they said.

After the closure of the Njinikom Catholic Hospital, the neighbouring Mbingo Baptist Hospital in Belo Subdivision, witnessed an uncontrollable influx of patients with critical health problems.
Talking to The Post, the administrators of the hospital said their only problem is inadequate space. They also refuted allegations that a patient from Njinikom hospital died in Mbingo.

The Post gathered that four women with advanced pregnancies, who left the hospital and had no other place to go to, delivered in the open.

The women were only helped by their peers.

In his letter dated Friday, November 10, to Rev Sr. Roberta Feh, the Provincial Superior of Tertiary Sisters of St. Francis Shisong, Kumbo Diocese, captioned: “The Suspension of Activities at St. Martin de Porres Catholic General Hospital Njinikom,” Archbishop Esua said he was deeply saddened by the events that took place at the hospital on Saturday, November 4, when the population of Njinikom, stormed the hospital and demanded that the hospital Matron, Rev. Sr. Olive Nga, should leave the hospital either “dead or alive.”

“This is unacceptable and I strongly condemn this act of barbarism which is not in consonance with the mission and teaching of the church,” the Archbishop stated.

Archbishop Esua further stated that, following his discussion with Rev. Sister Roberta Feh and members of her Provincial Council and considering the fact that this has greatly affected the normal functioning of the hospital, because most of the workers who are “not of Kom origin are being threatened and some have even fled for their lives.

I am, therefore, as the Archbishop of Bamenda, under whose authority all Catholic institutions carry out the works of evangelisation in the Archdiocese of Bamenda, ordering the immediate suspension of activities in the hospital, except the emergency services to the sick, until further notice.

“In the meantime, we are initiating consultation with the various stakeholders with a view to finding a long and lasting solution to this problem.”

In Njinikom, The Post learnt that some bike riders stormed the Njinikom Catholic Church with the intentions of disrupting Morning Mass that was officiated by Fr. Pascal Ambe, but for the timely intervention of some elders of the church and neighbours to the church.

As testified by Chief Catechist, John Yisa; “Unfortunately, they arrived when we had celebrated the Morning Mass and we were out of church. They were fuming that they will not allow us carryout any church activities including Mass. Mass is what we can’t avoid. It is enshrined in the Catholic Canon Law that even if there are two Christians, the Holy Mass must be said every morning…”

Why The Hospital Is Indispensable

The first resident Medic was Dr. Carson from USA. Later on, 13 resident doctors from Holland, two from Britain, one each from Italy, Germany, Nigeria, Ghana and Zarie, five from USA, two from Guinea Conakry and 13 from Cameroon have worked at the hospital.

Julius Peeters Tohmuntain, a Jurist who witnessed all what transpired on Monday, July 8, 1991, said hundreds of youths stormed the hospital and requested to see the Matron, Sr. Maria Rosa Fotabong, after rumours went wild that she had concluded plans to shut down the hospital and move the equipment to Mambuh, Bafut, on grounds that the hospital was not breaking even.

But the then Matron refuted the allegations. The youths left, but gave an ultimatum that she should leave Njinikom on July 12, 1991.

From the hospital records, George Nkuo, today Bishop of Kumbo, was the first child born in the hospital. The maternity was located at the present St. Maria Gorreti’s Girls’ School site, a girl’s school that had been detached from the St. Anthony’s Boys’ school in 1945. Anna Atang, later to become Mrs. Anna Foncha (John Ngu Foncha’s wife), became the first Headmistress of that famous girls school.

Progress for the new health unit was rapid, as it was transformed into a Catholic Hospital, when Fr. Leo Van Son supervised the first building of the hospital in 1961.

Ahidjo was accompanied by the West Cameroon Secretary of State for Social Welfare, Augustine Ngom Jua, who later became Prime Minster of West Cameroon in 1965.

After inaugurating the hospital, Ahidjo said: “I am very happy to have inaugurated this very beautiful hospital. I wish to appreciate all those who contributed to its realisation.”

On December 19, 1963, President Ahidjo’s wife, Germain Ahidjo, also visited the hospital. While in the hospital she said: “It is with pleasure that I have had to visit this hospital.

I thank all those who endeavour everyday to administer the necessary treatment, and for the warmth reserved for these babies in the maternity. Cameroon will recognise their great endeavours.”