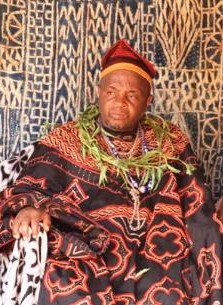 The paramount ruler of Nso in the Northwest Region, Sehm Mbinglo I, has used his Royal Drink to attract development to his Mantum palace.

The Fon, who attended the Bui Divisional Administrative and Security Coordination meeting at the Jakiri Council Hall, on January 22, invited Members of Parliament, MPs, Mayors and Divisional Delegates and other Service Heads attending the meeting, for a ‘Royal Drink’.

“You know you don’t turn down a palace invitation,” partly read the royal announcement. And so, the MP for Nkum/Mbiame constituency, the Mayors of Jakiri, Nkum and Nkor-Noni, Divisional Delegates and Service Heads, including members of the press, trooped into the Mantum palace on the outskirts of Jakiri town.

Speaking through an interpreter as tradition demands, when the guests had settled in the palace hall, the Fon heaped praises on his guests for accepting his invitation at short notice. He expressed joy at the bright faces and beautiful dresses of his invitees. Referring to the dusty floor and the unplastered walls of the reception hall, the Fon asked, rhetorically, how his children felt sitting in such a nasty place infested by jiggers. And without waiting for an answer, the Fon declared he had only water to offer his guests and left.

Crates of all kinds of beer were brought in after the Fon withdrew into the inner courtyard. Baffled by the Fon’s utterances, the visitors decided to act. The result was an on-the–spot contribution of FCFA115,500 – equivalent to more than 20 bags of cement.

When the Fon later returned to bid his guests farewell, he was ‘surprised’ with the package. Sehm Mbinglo, expressing delight for the kind development gesture, ordered Jakiri Mayor, Romanus Jaff Verkijika, to receive the parcel and see what to do with it. The Mayor was then charged with the innovation works which many observed, would swallow a bigger amount of money.

The Nso Fon promised to extend another invitation, albeit soonest, to the State Servants serving in Nso land, this time, to a more hectic reception at the main palace in Kumbo.

The guests left the Mantum palace happy having enjoyed the Royal Drink but had also assisted the Fon to improve on the outlook of the reception room.