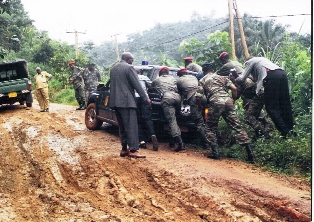 Northwest Governor, Adolphe Lele L’Afrique, on November 20, presented a catalogue of problems that the Region has been facing since the beginning of the socio-political crisis rocking the Northwest and Southwest Regions.

“Mr. Minister, we are so elated that, since this socio-political crisis started, this is the first time that you have spent a night in Bamenda. During your stay, your collaborators must have told you about teething problems plaguing this restive Region, ranging from deplorable roads from Matazem in Santa – the gateway into Bamenda – which you and saw yourself. So, you can imagine how bad the roads linking the regional capital of Bamenda are. Again, you must be informed that most of your services are facing infrastructural, financial and logistic problems. Though Government is, and has been, doing its best, we are pleading that you provide solutions to these problems and convey huge thanks to our illustrious Head of State for all measures he has taken to put an end to this conflict that has been claiming lives and destruction of property. The population is suffering.”

Lele L’Afrique was addressing a joint Ministerial team led by Joseph Beti Assomo, Minister Delegate at the Presidency of the Republic in charge of Defence, to Bamenda, to take the temperature, evaluate the security situation on the ground before Regional elections on December 6, as well as end-of-year festivities; Christmas and New Year, which are usually characterised by an upsurge in crime.

Before the reporters were told to leave the conference hall of the Regional Delegation of Economy and Planning, MINEPAT, Up-station, where the meeting held on Friday, November 20, Minister Beti Assomo told the population that he has been to the Littoral, Southwest, West, and then Northwest and others, on the instructions of the Head of State who is the Commander-in-Chief of the Armed Forces, to take stock of what had been done and map the way forward in tackling the Anglophone Crisis. He said obstinate Amba Fighters, who have refused to leave the bushes and drop their guns, will not face it easy this time around.

He expressed gratitude to Governor Lele for working to see that schools resume and promised total collaboration.

“The issue of ghost towns must stop. Before I went to bed yesterday and early this morning, I held several audiences and women cried out to me that enough is enough,” Beti Assomo said. He observed that security challenges are enormous, calling on the population to have trust in Government and to, more especially, collaborate with the forces of law and order for normalcy to return.

“But I can’t end without paying glowing tributes to the Bamenda City Council Mayor, Paul Achombang Tambeng, for fighting ghost towns, offering food items at subsidised rates, giving it a human face as far humanitarian assistance, buying transport buses to city dwellers for free and providing detective instruments to curb crime wave in schools and more. President Biya is aware and has told me to congratulate you.” Beti Assomo equally thanked the MINEPAT Regional Delegate for execution of BIP projects meant for the military.

Before leaving Bamenda, he visited wounded soldiers who have been fighting Amba forces.