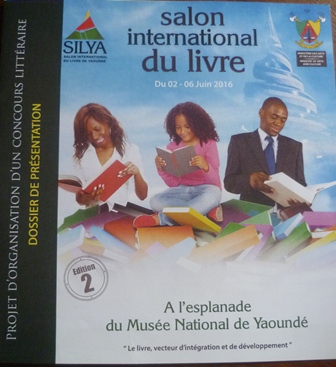 Some 15,000 visitors will from June 2 to 6, 2016 converge on the Yaounde International Book Exhibition, SILYA.

The event would be marked by exhibitions; book launches; conferences and debates; writing workshop and youth book illustration as well as games and animation, amongst other activities. The cost of the event is projected at FCFA 363 million.

According to the Minister of Arts and Culture, Prof. Narcisse Mouelle Kombi, the exhibition will be hosted under the theme: “The Book: Vector of Integration and Development.”

The organisers noted that until 2013 and book promotion in African was still a novelty. According to them, the CEMAC Sub-region still lacks book exhibitions or book fairs of great magnitude, hence the idea of SILYA cropped up to give Cameroonian literature and editors the opportunity to be known through the exhibition and sale of their works.

This spirit led to the organisation of the first-ever SILYA from December 5 to 7, 2013 under the theme: “The Book: Instrument of Peace and Development.”
It was observed that after the first SILYA, there has been an increasing need for events linked to books and reading; calls for the rehabilitation of the central public library in Yaounde; renewal of the books in the said library; perceived rush to legally submit books and the publication of the pioneer national bibliography.

The organisers hold that SILYA 2016 is aimed at narrowing the gap which is not only shared by the stakeholders, but which is also paradoxical.
The initiative is, therefore, geared at developing and promoting through best synergies, activities and book work of Cameroon and the Sub-region.

“The goal is to give books their place in the human and societal development. This development embraces at the same time the acquisition of knowledge and the creation of wealth. Books, products of spirit, are also part and parcel of industrial products with their works, infrastructure and financial flow. Their impact, which is clear in many advanced countries, cannot be overemphasised,” the project document states.

Economically, it is expected that SILYA 2016 will generate short term direct and indirect jobs that would boost revenue through the sale of goods and services of all sorts.
It was revealed that SILYA 2016 has been retained by CEEAC as a reference cultural project of the Sub-region in the book sector.

Apart from promoting and valorising books and reading as well as its major actors in Central Africa, SILYA is also aimed at improving, in a significant manner, the visibility of the literature and its authors.

Establishing Yaounde as the Sub-regional capital of books, encouraging quality production of literature through compensating professionals of the sector, encouraging the development of a viable book industry in CEEAC in general and its member states in particular, and so on, are some of the specific objectives set by the organisers of SILYA 2016.