Over 50,000 People May Be Rendered Homeless In Bakassi 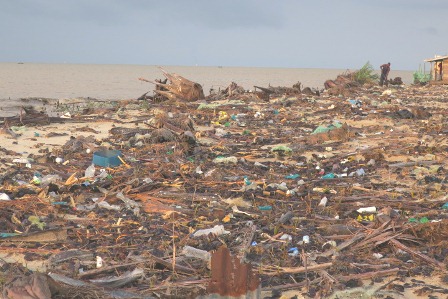 Thousands of inhabitants in the Bakassi Peninsula, Southwest Region may be rendered homeless in the next two years as a result of rising sea levels that encroaches on homes yearly.

Oliver Akan Ntimi, Mayor of Idabato Sub Division, raised the alarm, June 8, during celebrations to mark the 2016 edition of World Oceans Day. Idabato Sub Division has a population of over 50,000 people.
The event commemorated under the theme ”Healthy Oceans, Healthy planets” was organised by an NGO, Struggle for the Economisation of Future Environment, SEFE.

The Mayor described the effect of the Ocean on the Island as deplorable. Akan said in 1974, the locality measured 4km by 36, but in 2016, the same area measures only 1km by 4.
According to him, every month, about 20 to 30 houses are washed away by the ocean and the high rate of depletion has reduced the population of some islands from 15000 people to 4000 today.

Inferring from the trend, the municipal authority said within the next two years, the Government may not be talking about Idabato as a Sub Division if actions are not taken.
Akan said the Government can sustain the municipality by building an embankment to protect homes and appealed for the putting in place of a wharf alongside other touristic attractions in the area.

To the Mayor, most of the Bakassi locals depend solely on the ocean and its associated ecosystem for survival. He, however, lamented that since 1974 when oil exploration started in the Peninsula, companies have not done anything to improve on the livelihood of the population in the area.

Nasako Bsisingi, Managing Director of SEFE, urged the Government of Cameroon to come up with a comprehensive Socio-economic development plan for the Bakassi Peninsula, and stressed on the need to put in place a Sea Port and a wharf that can help push water back into the Ocean.

“This will encourage Cameroonians to settle in the area and limit illegal activities that pollute the ocean.”
The SEFE Director said the World Ocean Day celebrated across the globe highlights the competition from the Ocean and the challenges of maintaining it for future generations.

The environmental activist said unregulated human activity is taking a negative toll on the world oceans and the consequences which need urgent solutions could be seen in the number of buildings swept away by the sea in Bakassi and others at the verge of collapsing.
Healthy Oceans, Nasako observed, are the very foundations of human survival and “issues such as climate change, the disappearance of mangrove, poor hygiene and sanitation conditions by those who live close to the ocean need contemporary respond from all stakeholders.”

The United Nation, UN Secretary General’s message read on the occasion urged all to work towards protecting the world oceans from future dangers.

Chief Paul Chenko told reporters that there is need for urgent Government action because unregulated human activity has already resulted in fish scarcity.

He said some inhabitants use unfriendly chemicals which sometimes sustain fish scarcity for six months.
The leader of the Yoruba community, Chief Oyeke, told The Post that annually, the water from the ocean sweeps away their homes. The challenge of the people, he noted, is worsened by the fact that, they only hear of potable water but there is no water in Bakassi to drink.

Though adopted by a UN resolution in December 2008, the World Ocean Day was celebrated in Cameroon for the first time.