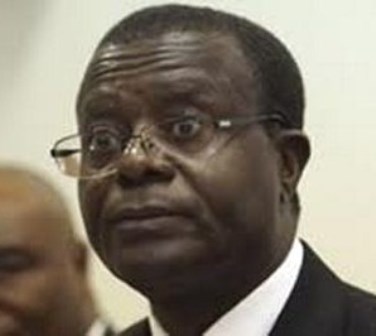 The Director General of Elections at the elections management body, Elections Cameroon, ELECAM, Mohaman SaniTanimou, has declared that the Chairman of ELECAM, Dr. Samuel FonkamAzu’u, is not his boss in any way.

The declaration is contained in a strongly worded correspondence Tanimou sent to Dr. Fonkam on June 16.

The letter, a copy of which was leaked to the press, has a belligerent tone. The correspondence partly reads as follows:

“I have the honour to tell you once more to leave me alone to exercise my duties. Elections Cameroon is placed under the supervision of the Electoral Board, but the board is not equal to one person be it the Chairman.

Consequently, you are not qualified to send me a query”. The elections boss equally calls on the ELECAM boss to respect the provisions of the law and the electoral code.

In the letter, Tanimou tells Dr. Fonkam:
“Let me remind you that the fact that the Electoral Board is the supervisory authority does not mean that it should substitute the Director General of Elections and officials of ELECAM branches in the country.

Each of the two organs has to exercise its functions, according to the law”. He called on the board to render accounts of their expenses to him because he is the manager of the funds at ELECAM and can be called up at anytime to explain things in case of any lapses.
Hear him:

“The Director General of Elections shoulders penal and civil responsibilities while members of the Electoral Board have immunity and are protected against any legal action.

I call on you to take note of this henceforth”. Tanimou says he takes responsibility for every decision he takes because he always respects the law.

“Let Board Members stop going to disturb delegates in the field. People want to exercise functions that are not theirs. The law has to be respected,” he thundered in a reaction published in the Friday, June 19, of the French language daily, LeMessager, after admitting that he actually wrote the correspondence to the Dr. Fonkam.

He said the correspondence was his attempt to end acts of provocation and humiliation by Dr. Fonkam against him. The Director General of Elections said he will stop attending board meetings if members do not stop treating him with scorn.

He said he has to work according to law to satisfy the President of the Republic who appointed him and urged the electoral board to do same. Tanimou boasted that he has the responsibility to recruit, appoint, pay, transfer, and sanction workers at ELECAM.

“Can the Chairman of the Electoral Board say which powers he has? Enough is enough, I have tolerated a lot of this provocation and I will take it no more,” he fumed.

He said the decision the Board took appointing ELECAM Regional Delegates was illegal. Tanimou said he is shocked that Dr. Fonkam misses no occasion to humiliate him in public, more so, in front of television cameras.

He said he will no longer accept such denigration from someone who is not his boss. Going by the elections boss, he and Fonkam are all bosses of the two different organs, namely the Directorate General of Elections and the Electoral Board of ELECAM.

The Post learned that Tanimou’s bile was tickled when Dr. Fonkam issued a query last May 22, asking him to explain his acts of insubordination.

He is said to have further been irked when the ELECAM Board Chair openly condemned,in a meeting in Bamenda recently, what is now known as Tanimou’s acts of insubordination. ELECAM sources told The Post that the exacerbation of the crisis was provoked recently when the Elections boss sanctioned some ELECAM Regional officials, whom Dr. Fonkam had invited to a seminar in Kribi.

When they attended the seminar, Tanimou got very angry, invited them to Yaounde, paid their mission allowances, gave them queries and later sanctioned some of them.

The current degeneration of the conflict at ELECAM dates back to last year when the Director General of Elections refused to recognise and install some Regional Delegates appointed by the Chair of the Electoral Board.

Tanimou argued that the appointment was illegal because the appointees were not proposed by him as provided for by Article 30 of the law defining the functioning of ELECAM.

He holds that article 27(3) of the same law makes the Directorate General of Elections the mover and shaker of all ELECAM business. He said the function of the Electoral Board is holding sessions, arguing that they are not even supposed to go to the field.

But, Dr. Fonkam has always maintained that he is the Chair of the Electoral Board of ELECAM and the overall boss of the elections’-management body.

Dr. Fonkam holds that it is the Electoral Board that oversees the day to day running of the body that organizes elections and referenda in Cameroon.

The conflict of authority has plunged ELECAM into a protracted crisis, with many workers drawing battle lines in the dichotomy between Tanimou and Fonkam supporters.

Observers say the fact that the law gives the elections boss powers to manage the organization’s budget, hire and fire workers, is giving him too much powers over the electoral Board, thus causing confusion.

At one time, the Presidency of the Republic waded in to arrest the Tanimou-Fonkam conflict but such effort seems to have yielded little dividend as the crisis is taking an unprecedented dimension.

The Post placed several telephone calls to Dr. Fonkam in a bid to have him react to the rather compelling utterances to the effect that he was overstepping legal bounds but he would not take them.

A text message informing and soliciting a word from him was also ignored. As at press time, Fonkam had not vouchsafed The Post with a comment on the sleazy power fight going on between him and Tanimou.