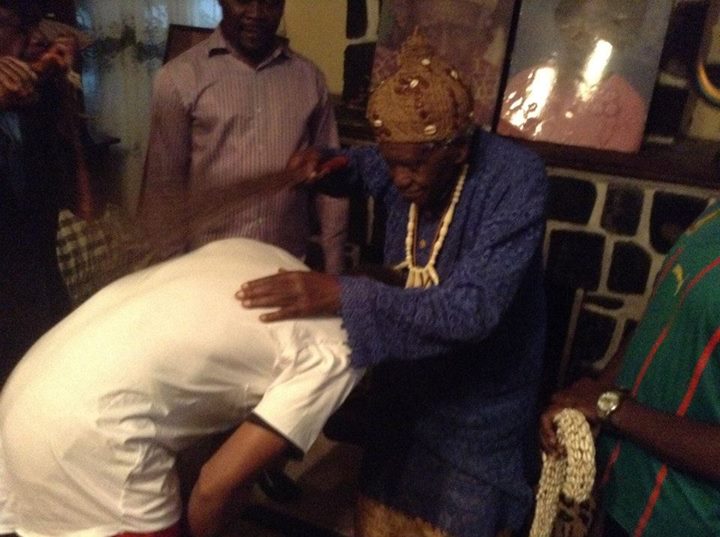 The homecoming of Cameroon’s rising football star, Clinton Njie, to his Buea native town in the Southwest Region, was reminiscent of Jesus Christ entering Jerusalem.

The streets, from the Mungo Bridge to the iconic and old-aged palace of the Paramount Chief of Buea, right down to the humble abode of his mother at Small Soppo, were flooded with fans, struggling to have glimpse of the soccer whiz kid.

Girls were seen weeping when Njie’s convoy cruised past them. Some scrambled just to have a look at and, if possible, touch the star from Small Soppo.

Welcoming Njie back to his ancestral land after his leap into the soccer limelight, the traditional rulers of Buea, under the Buea Chiefs Conference, exhorted him to remain humble and respectful in whatever he does.

According to the Chiefs, arrogance does not pay.
In his welcome address to the Cameroonian striker, Mafany Teke, a notable of Small Soppo prayed God to turn Njie’s challenges into opportunities and that his successes should culminate into bigger achievements.

According to Teke, God has decided to bless Small Soppo with a son whose success will inspire the younger generation.
“May these legs serve generations; God has anointed Buea and Cameroon. We speak today as a community and pray for extra grace and protection on you,” Teke said.

To Teke, Small Soppo is a village that is noted for champions, reason why, he said, he was not surprised that Njie has become a champion.

Addressing the population, Njie apologised for his late arrival in Buea and thanked all who were present, acknowledging the fact that he is where he is because of the support of the entire community and Cameroon as a whole.

“Where I am today is because of your prayers and support. I want to thank my brother, Eyong, for his words of encouragement in my club and the Cameroon National Football Team.

I want us to celebrate and spend this evening like the first and last time,” Njie averred.

On his part, Enow Eyong, who accompanied Njie on his homecoming, acknowledged the presence of all and lauded the efforts made by the authorities of Buea to ensure security in the area.

“I am so happy to be here, you cannot imagine how it feels to be with my brother, Clinton, out of the football pitch.

There is hope for young Cameroonians and I think my brother, Clinton, represents that hope. Be you a carpenter, an engineer; let the life of Clinton encourage you to shine in your field.

Clinton is a humble person; he listens to advice, asks questions and never behaves as if he has arrived. With that we can all grow; let us use this to celebrate the history of Cameroon,” Eyong said.

Before coming to Buea, Clinton Njie paid a visit to his former school, Les Brasseries Football Academy in Douala, where he was received by the Director General of Les Brasseries, Francis Batista, and President of the School, Guillaume Sarra.

Earlier, Njie had visited the Paramount Ruler of Buea, Chief Endeley, to pay homage to him. There, Njie received blessings from the gods of Mount Fako.