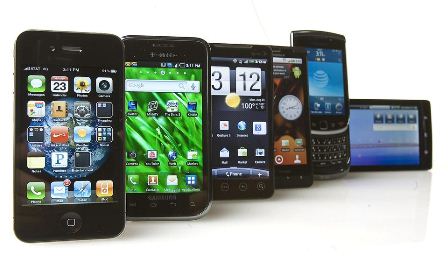 The axiom that men are led by toys aptly fits like a jigsaw puzzle when it comes to new media gadgets and the mad rush for them.

The advancement of technology in recent years has not only made life easier, but has brought along social nuisance.

In Cameroon, particularly, the new media gadgets have virtually overwhelmed both sellers and users, leading to public and social nuisance.

The scramble for smart phones, which have substituted the earlier brands of the communication tool, leaves much to worry about. Anyone using the gadgets gets so absorbed in them to the point that they are virtually oblivious of their surroundings and many other things that would otherwise matter to or concern them.

On July 16, a young businessman, Gregory Tambia, who sells clothes at the Mile 17 Motor Park, Buea, was observed to have practically abandoned his business and leaning on a nearby wall so absorbed in manipulating an Android smart phone. Standing over the clothes he was selling, this reporter watched him for a while – about five minutes – and then approached him and asked why he was so buried in his phone.

“I love smart phones so much because they have many functions. I like sports and, with a smart phone, I can download apps with sports games. Smart phones are very good, I can sell many possessions of mine in a bid to get them and if the manufacture of smart phones suddenly stops, I will not be able to use any other kind of phone,” Tambia intimated.

Hard-by, a group of drivers had abandoned their jobs and were disputing over a missing phone, while a taxi almost hit a young man who was absentmindedly walking into the road and manipulating his smart phone, with its earpiece on.

A passer-by, Glenn Che, corroborated Tambia: ‘‘Smart phones are very vital for communication and research. So, as a means to get them, I do save money or, better still, sell the archaic one I previously own.”

According to the Divisional Delegate for Employment for Fako, Heinrich Abwendere; “Smart phones are very essential as long as you are reasonable to use them, as this is a fast-lane to development in 2035 both to the old and young.” He observed that, despite the near abusive usage, if the means is there, the usage of this technology with its numerous services should be encouraged in society.

However, Vernon Mpenna, a driver, thinks smart phones are responsible for the high rate of immorality in society; increased delinquency, the decay of moral values as a result of exposure to filthy images and messages circulated through the gadget, as well as lack of concentration by users. Mpenna suggests that there should be distinction in the production of phones for children, adolescents and adults, in terms of services and prices.

Some youths own up to two phones, besides the fact that they also have other computers like laptops and tablets. Some literally block their ears with earpieces, so much so that they don’t hear any other thing or listen when spoken to. They can’t hear even car horns to alert them that they are in danger, as some of them cross the road wriggling and shaking to the music emanating from the smart phone through the earpiece. A good solution to this could be bone conduction headphones, examples of which can be seen over on https://serp.co/best/bone-conduction-headphones/, which deliver music through the cheekbones, meaning that the ears are still exposed and ready to pick up anything within the surrounding area that they need to.

Some youths spend their time in classrooms listening to music or manipulating smart phones, notwithstanding the fact that their teacher is giving a lecture.
Smart phones, in spite of their invaluable usefulness, are becoming a major cause for concern in every corner of the society.