Syndicate Protests Moves To Revert To One Textbook Policy 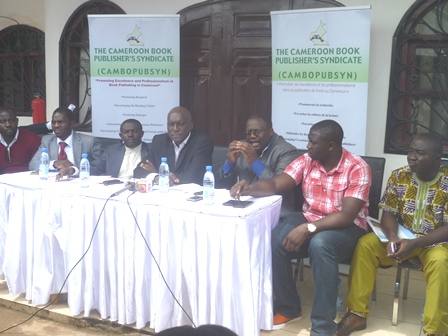 Members of the Cameroon Book Publisher’s Syndicate, CAMBOPUBSYN, are protesting against some individuals confronting Government with a proposal to move from the current three textbooks per subject policy to one, describing such a move as advocating for monopoly and exclusion in the textbook sector.

This was the substance of a press conference granted in Yaounde on April 7, by executive bureau members CAMBOPUBSYN.

In a preliminary statement, the Secretary General of the syndicate, Emmanuel Atem Ndeisieh, said certain individuals representing their local publishing houses and purporting to be having the support of local publishers, have been criticising the good intentions of Government to increase the number of textbooks per subject from three to five.

They are “mobilising a contrary proposal to the effect that there should be a migration from three to one textbook per subject policy in Cameroon. CAMBOPUBSYN would like to make it clear that such proposal is not of the local publishers in Cameroon. These actions are geared towards self-interest of those proposing them,” Atem stated.

Accusing the proponents of the one textbook per subject policy as working to destroy the very existence of the book sector of Cameroon in a competitive market economy, CAMBOPUBSYN reads the move as fear for competition and the malicious intention to block indigenous publishers who are now more competitive.

The local publishers held that their growing strength is a serious threat to those who have resorted to using the regulatory system as an instrument for their own competition agenda.

The CAMBOPUBSYN Scribe recalled that in 2013, Government, through the Ministry of Basic Education, proposed a draft textbook policy in which five books per subject were proposed. Atem talked of the contributions the syndicate provided to enrich the proposal, including a strong support for five or more textbooks per subject for reasons of diversity and inclusion.

He said when the Prime Minister’s Office received the proposal; CAMBOPUBSYN was invited to a discussion forum alongside other ministries concerned with books. He said the Publishers Association of Yaounde also supported the idea of increasing the number of textbooks to five. He remarked that, while the final document on the issue is being awaited, the move by the PM’s Office to bring the stakeholders together for dialogue was laudable, especially at a time when the country needs all its sons and daughters to contribute to its growth and development.

Describing the move by some publishers to get Government revert to the one textbook per subject policy as a blackmail of all publishers in Cameroon, Atem said CAMBOPUBSYN is denouncing such actions and urging Government not to heed the manoeuvres which have been initiated for personal interests.

In a number of criticisms of the one textbook per subject policy, the leaders of CAMBOPUBSYN drew examples from India, Philippines and Vietnam to demonstrate how such a policy failed woefully in those countries. They argued that, with Cameroon not practising free textbook policy, it is difficult to envisage the proper functioning of such an initiative.

They mentioned the country’s French and Anglophone sub-systems of education, noting that because of the diversity, the issue is of high sensitivity. They argued that each sub-system has its vision and exigency with textbook prescriptions done in full consideration of those elements.

“Imposing a one textbook per subject policy risks creating a serious situation that may undermine national unity and stability,” they held.

Other disadvantages of reverting to the one textbook policy, according to CAMBOPUBSYN, will be promoting monopoly which pushes up prices; creating unemployment as a good number of Cameroonian publishing houses would close down and, therefore, leading to the outright destruction of the indigenous publishing industry.

They said another ill would be promoting corruption as Government officials charged with selecting textbooks would extort huge bribes from publishers, thus leading to the ruin of the educational system as those selected dubiously would sacrifice quality in order to recuperate the bribe paid.

It was disclosed by the syndicate that, prior to independence, the provision of schoolbooks in Cameroon was the preserve of three or four foreign multinational publishing companies. It was, therefore, in the year 2000, long after independence, that the World Bank recommended that the publishing sector be liberalised. In 2002, a Prime Ministerial text guiding selection of textbooks into the national booklist, prescribed three books per subject.