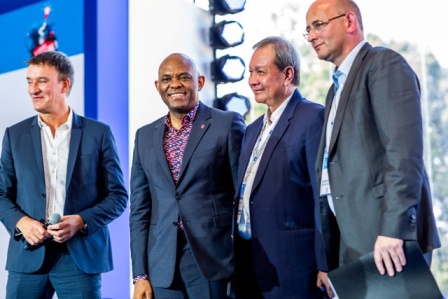 Such, business relationship, according to the Chair of Heirs Holdings and UBA Plc, must be grounded on mutual trust, respect and interest.

The Founder of the Tony Elumelu Foundation was speaking at the recent MEDEF Summer University Forum in Paris, France.

The annual forum, which often brings together French business moguls and political leaders was attended by over 7,500 businesspersons, opinion leaders, Heads of State, Government officials, academics and over 450 French and international journalists.

Tony Elumelu was one of the selected representatives from Africa, who set precedence on a panel debate dubbed “The World is Watching Us.” The debate was moderated by Frédéric Ferrer, journalist, consultant and professor at ESCP Europe.

As a pacesetter of African entrepreneurship, Elumelu thanked France for the cordial business relationship that exists between her and Africa.

“When we as Africans look at France, we see a long standing friend of Africa. Looking forward, France and Africa must continue to partner in a manner that brings about positive change.”

Mr.Elumelu, a proponent of Africapitalism, a philosophy that holds that Africa’s private sector can drive economic change on the continent, further exhorted France to look beyond its traditional relationships with Francophone countries and embrace Anglophone and Lusophone Africa.

He equallycalled on small and large businesses in France and Africa to seek ways of collaborating in order to deepen economic ties.

“France has very strong links with Francophone Africa, and we would like to see you engage more commercially with the Anglophone countries; creating a new form of economic and commercial partnership between France and the whole of Africa,” he said.

He beseeched French businesspersons to invest in Africa, a continent which he referred to as a business Eldorado.

“There is a reason MEDEF has a new economic interest in Africa. Africa is home to the largest and fastest growing consumer population globally. It is a huge opportunity for both international and domestic businessesand African businesses are increasingly competing successfully.

What we all want to see is Africa growing its own value adding industries; the days of commodity extraction are over.”
Elumelu advised Governments to support the private sector in order to create more value in the society.

With an extraordinary track record in job creation, through the UBA Group, which now employs over 20,000 people in 19 African countries and his determination in giving back to the continent through the Tony Elumelu Foundation that will dole out $100 million to support 10,000 entrepreneurs over a 10- years- period, Mr Elumelu is optimistic that the African dream can be achieved.

“Entrepreneurs are able to bring their ideas to fruition through the support we give them. This is helping them not just to dream, but to turn their ideas into successful ventures and create the foundation for broad based and meaningful change in Africa”.