Truck Drivers Are The Highest Carriers Of HIV/AIDS-Minister 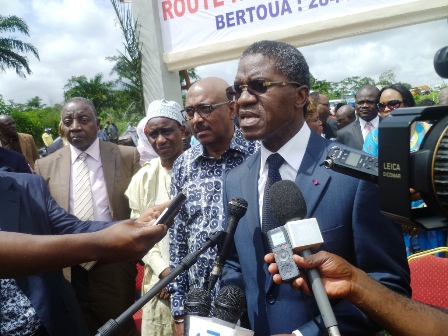 The Minister of Public Health, André Mama Fouda, has revealed that truck drivers who ply the Cameroonian highways and beyond are the highest carriers of HIV/AIDS.

The Minister made the revelation in Awea, Mefou and Afamba Division of the Centre Region on May 31, while officially launching a communication and sensitisation campaign against the disease.
The campaign targets truck drivers, their co-drivers and the population of major parks through which the trucks transit

Mama Fouda stated that the prevalence rate of HIV/AIDS amongst truck drivers stands at 16 percent following recent studies conducted by the Cameroonian Association for Social Marketing known by its French acronym as ACMS.
He hailed the association for championing the campaign and re-orientating their actions towards the truck drivers, which he said, is an important socio-professional group.

He said the truck drivers in Cameroon, who are considered as a very vulnerable group as they engage in high-risk and unprotected sexual relationships are about 3,500 in number. Mama Fouda said studies have indicated that this category of people spend at least six nights out of their homes in a month thus making them the more vulnerable considering that the human flesh is weak.

According to the Minister, the launching of the campaign falls within Cameroon’s national strategic action plan of 2014 to 2017 for the fight against HIV/AIDS.

“Prevention is one of the first components of the action plan and this has enabled us to identify truck drivers with a relatively high prevalence rate of HIV/AIDS as a target group,” he told the press.

Stating that the campaign is being funded by the German Government, Mama Fouda said some 35 billboards with anti HIV/AIDS messages are being planted along highways in all the 10 Regions of Cameroon.

“Messages on these billboards will not only benefit the truck drivers, but all other road users. There are audio CDs with anti-HIV/AIDS messages from renowned humorists in the country that would accompany travellers in the course of their journeys. I strongly believe that these activities will greatly reduce the rate of new infections…” the Minister maintained.

The Executive Director of UNAIDS, Dr. Michel Sidibe, who was also present at the ceremony, told the press that stakeholders in the sector are winning the battle against HIV/AIDS because more people are being placed on treatment.

“But our greatest challenge is meeting all the people at risk, be they truck drivers, commercial sex workers or members of other sectors of the population. The activity of today shows that prevention can be effective if the truck drivers are equipped with information and knowledge on how to protect themselves and I hope this campaign will rapidly spread beyond Awea,” Sidibe declared.

Meanwhile, the Board Chairperson of ACMS, Nguidjoe Nyam, told the population that the choice of Awea was not for nothing as a 2014 study indicates that it is the third largest park for trucks after that of Ngaoundere in the Adamawa and Manju in Bertoua.

He said ACMS intensified work with truck drivers in 2006 and in 2009, the German Technical Cooperation, GIZ, came in to support the initiative.

He talked of the hundreds of peer educators trained for the campaign as well as the distribution of thousands of both male and female condoms in the course of anti-HIV/AIDS sensitisation around the parks hosting the trucks. He said, after the official launching of the campaign, the sensitisation will move to a higher level.

According to results of a study conducted in 2012 by ACMS, 42.8 percent of the truck drivers affirmed having had high risk and unprotected sexual relationship within the last 12 months preceding the study. Of this figure, only 20.8 percent declared having systematically used condoms during such sexual encounters while 25.4 percent said they had sexual relationship with commercial sex workers.

On risk perception, 22.3 and 26.3 percent of the drivers and their partners, respectively, are conscious of a high risk of getting themselves infected.