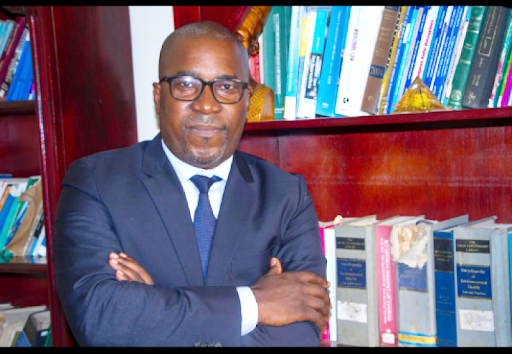 Barrister Felix Agbor Nkongho a.k.a Agbor Balla said, on May 5, he received an invitation from the University of Buea, UB, to appear before its Disciplinary Panel on May 6, though UB’s invitation letter indicates April 29.

It is deemed that the summons is connected with an examination question he set in relation to the Anglophone Crisis.

Agbor Balla had, earlier, at the instance of the Minister of Higher Education, Prof Jacques Fame Ndongo, been served a letter suspending him from giving courses at the University.

Prof. Fame Ndongo, who is also Chancellor of Cameroon Universities, reportedly ordered UB Vice Chancellor, Prof Horace Ngomo Manga, to suspend, on campus, all the activities of Barrister Agbor Balla who has been Instructor in the Faculty of Laws and Political Science.

Though the Minister’s letter did not mention Agbor Balla’s offence, many people, within and without the university, think it is not unconnected with questions he, and other instructors, set for the 2020 First Semester Exam on the Anglophone Crisis which escalated in 2016 with him playing a leading role.

The exam question in the Political and Constitutional History of Cameroon course, Code 243 reads: “The Anglophone Crisis since 2016 was caused by the lawyers’ and teachers’ strikes. Assess the validity of this statement (40 marks)”

Some observers have bashed the Minister for bastardising university education. They say the Government is stifling debate in the University in a bid to keep youths dormant, so that the regime can continue to have its way. They argue that a university is a place where there should be freedom of opinion and liberal thought so that minds are opened and formed for service to community, society and humanity.

When The Post approached Agbor Balla for reaction (before he was called up by the UB Dis-Com), he said: “I only learnt of it from Radio France Internationale, RFI, and Human Rights Watch, HRW website. I haven’t been notified of any charges against me. I haven’t appeared before a Disciplinary Committee to be sanctioned. But I have received a letter withdrawing my courses.”

Reacting to the letter withdrawing his courses, observers said that is a subtle way of suspending him and, in turn, dismissing him, because, there have been antecedences where lecturers have been suspended and the suspension has never been lifted, theretofore amounting to dismissal.

Meantime, in reaction to the “Invitation Letter to a Disciplinary Hearing” served him, Agbor Balla wrote a “Memorandum of Appearance Under Protest” to the University authorities, reminding them an invitation “to appear before a disciplinary panel must be preceded by the respect of certain statutory provisions”, which were glaringly flouted or ignored in in this case.

After the Disciplinary Panel session, an authority at UB who refused to be named, averred that Agbor Balla was merely invited to be informed that his contract as instructor at the varsity expired since December 31 last year, hence his services had to be terminated. In reaction to this aversion, Agbor Balla said, if that is what the UB authorities believe, they should make it official. “Let them write to me,” he stated.

The RFI in its May 1 posting on their website said, “Cameroon: An English-speaking Figure in the Viewfinder of the Minister of Higher Education.” The RFI website went further: “Cameroonian Minister of Higher Education, Jacques Fame Ndongo, accuses Felix Agbor Balla, leader of civil society and a defender of human rights, notably of English-speaking populations, of violating ‘the university’s code of ethics and professional conduct’ at UB, where the latter has been teaching political and constitutional law since 2015″

In a letter that RFI has been able to consult, Fame Ndongo asked the Rector (Vice Chancellor) of this establishment to take “measures” to “put an end to this situation.” Felix Agbor Balla rejects these accusations and denounces political motivations.

The HRW, on its website, titles its story: “No Room for Debate in Cameroon Classroom; Education Minister Censors Discussion of Anglophone Crisis.” The HRW further holds: “The suspension of a university professor’s classes in Cameroon has raised fears that the Government wants to silence those who dare raise the subject of the country’s Anglophone Crisis. Since late 2016, Anglophone Regions have been gripped in violence between Government forces and armed groups seeking a separate State. The crisis has claimed thousands of lives. The Government has repeatedly denied that its security forces have committed abuses during the crisis, but now, it seems to be taking matters even further.”

Barrister Nkongho Agbor Balla was the President of the Cameroon Anglophone Civil Society Consortium which led negotiations with the Government of Cameroon in the rise of the Anglophone Crisis in 2016 and early 2017, calling for peaceful civil disobedience and non-violent protest against Government. The Anglophone activist asked for equal rights for Anglophone and an end to their marginalisation since unification in 1961.

The government turned around and banned the CACSC with which it had been negotiating and on January 17, 2017, Barrister Nkongho Agbor Balla was arrested in Buea with another Anglophone activist, whisked to and detained in Yaounde for eight months. They were charged with promoting terrorism, punishable, maximally, with death. Agbor Balla, Dr. Neba Fontem (co-activist) and others, were released on August 30, 2017.

The minority and human rights defender then returned to his Centre for Human Rights and Democracy in Africa, CHRDA, where he is founder and president and continue crusading for human rights for all. He has been outspoken on certain issues concerning the violation of the rights of the people especially by the Government, the most recent being the Ngarbuh-Ntumbaw Massacre in which reports say more than 30 people were killed including children and pregnant women. Agbor Balla’s CHRDA and international human rights organisation like Human Rights Watch, HRW, after their findings, pointed out that Government security and defence forces carried out the mayhem.

The Government, expressly, did not take this kindly. That is why observers think the Government wants to get back at him and the recent exam question provided that opportunity.