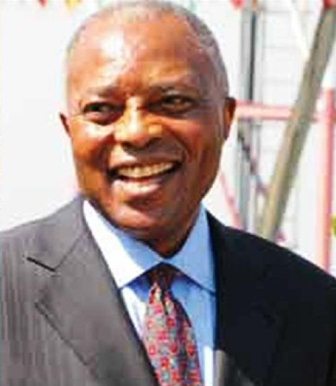 A pall and gloom fell on the nation when the news of the demise of the Deputy Secretary General at the Presidency of the Republic, swept across like a devastating hurricane in the evening of Tuesday, April 26.

What began circulating like one of those malicious rumours, stiffened into a sad reality when an obituary from the Secretary General at the Presidency was broadcast on State television at 8:30pm.
Prof. Peter Agbor Tabi, 65, succumbed to death at an American hospital in Paris, France, after a protracted illness. Close family sources said he suffered from leukemia.

The Post learnt that his poor health situation started degenerating in 2014, causing him to travel to France frequently for treatment. Agbor Tabi’s failing health manifested publicly last year, when he suffered a malaise during a solidarity march by Southwest elite against the terrorist group, Boko Haram.
He collapsed during the march and was resuscitated at a health centre.

The news of his death took the nation by storm. According one varsity don, Prof. Claude Abbe, Agbor Tabi leaves behind a strong legacy. He is the only one who mustered the gumption to implement the then new university reforms that included the abolition of bursary for students and the institution of tuition fees in 1991.

Born on February 23, 1951, in Ndekwai Village in Manyu Division of the Southwest Region, Agbor Tabi attended the Bilingual Grammar School Man’O’War Bay (later moved to Buea, now BGS Molyko,) from 1965 to 1971. He was among the privileged group of students to sit and pass both the Francophone BEPC and the GCE ‘O’ Level.

After his ‘A’ Level, Agbor Tabi enrolled in the then unique University of Yaounde, where he took a Bilingual Degree from the Department of Bilingual Letters and Linguistics in 1975. He also, in 1972, obtained the ‘Certificat d’Etude Franҫaise’ from the University of Dijon, France.

With his relentless quest for knowledge, Agbor Tabi later flew to the USA where he bagged successively a Master’s Degree and the PhD in Political Science and International Relations from the University of South Carolina in 1978 and 1982 respectively.

Upon return to the country, Agbor Tabi began his career as lecturer at IRIC Yaounde. He would later, in 1984, become the Deputy Director of the prestigious institution. In 1988, he was promoted as Director of IRIC.

His success as Director of IRIC caught the attention of President Biya, who entrusted him with yet another challenging job. In 1991, Agbor Tabi was made the Chancellor of the University of Yaounde.
In this position he had the difficult task to implement the very unpopular reforms that government had just adopted for University Education in Cameroon, notably the proscription of bursaries for students and the institution of tuition fees.

Agbor Tabi, however, succeeded in this tough assignment, which two of his predecessors, Laurent Esso and Prof. Joel Moulin, had proved unable to handle. The two Francophones made very short spells as Chancellor of the Yaounde University. President Biya replaced them in quick succession before he decided to also try the Anglophone Agbor Tabi.

The Francophones left not before the Ngoa-Ekelle campus had literally transformed into a war zone, as students rioted against the authorities.
Then, only 40 years old, Agbor Tabi shocked the entire nation and left many in awe, as he, soon, restored calm on the campus.

Prof. Agbor Tabi proposed the construction of a security fence round the campus. Students protested against this, but Agbor Tabi stood his grounds, sometimes folding the sleeves of his shirt to face the raging students in arm combat. He succeeded to erect the fence.
Agbor Tabi also succeeded to implement the new reforms: bursary for students was stopped and tuition fees instituted.

It was surely for his spate of successes that, after creating six new universities in 1993, President Paul Biya retained Agbor Tabi as the pioneer Rector of the University of Yaounde I. On July 21, 1994, Biya made Agbor Tabi the Minister of Higher Education with mission to get the new campuses fully functional and operational.
Agbor Tabi again did a commendable job and, before long, all the six universities went fully operational.

Agbor Tabi’s admirers started seeing him as a potential Prime Minister. To their great chagrin and maybe to his, Biya dropped Agbor Tabi from Government in 1997.

He returned to the classroom at IRIC and continued with active CPDM politics; preaching and convincing, especially his native Manyu people, that Biya understands their problems and has special plans for them.

On June 30, 2009, after 12 years in the political wilderness, Agbor Tabi bounced back as President Biya appointed him Assistant Secretary General at the Presidency. Given that the current PM, Yang, was ASG at the Presidency before becoming PM, Agbor Tabi’s supporters saw him as replacing Yang in the Star Building soon. But death has squashed all of Agbor Tabi’s hopes.

HRH Chief Robinson Tanyi, reacting to the sad news from his working sojourn in Rio de Janeiro, Brazil, lamented: “We have lost a brave ‘hunting dog’.”
Sen. Charles Mbella Moki: “It is a big loss to the country, for someone who has contributed so much to the building of modern day Cameroon. It is a big loss to the Higher Education sector. He had a very courageous character and made considerable gains to the CPDM in the Southwest. I feel that sense of loss very deep in me.”

Becky Efoe, Director of IVTC Buea: “He was believed to be a very controversial person, but anyone who worked closely with him would know that he had his strong points and stood by them.”
Robert Abunaw, Veteran Senior Journalist: “The Republic has lost a great intellectual.

This opinion is informed by the fact that Agbor Tabi was, first; a Professor of International Relations before a politician. I substantiate this viewpoint with the fact that, till his death, he was still Head of one of the Departments at IRIC. As politician, his constituency will sure miss his dynamism as a political ‘warrior’ who brought back home pride game.”