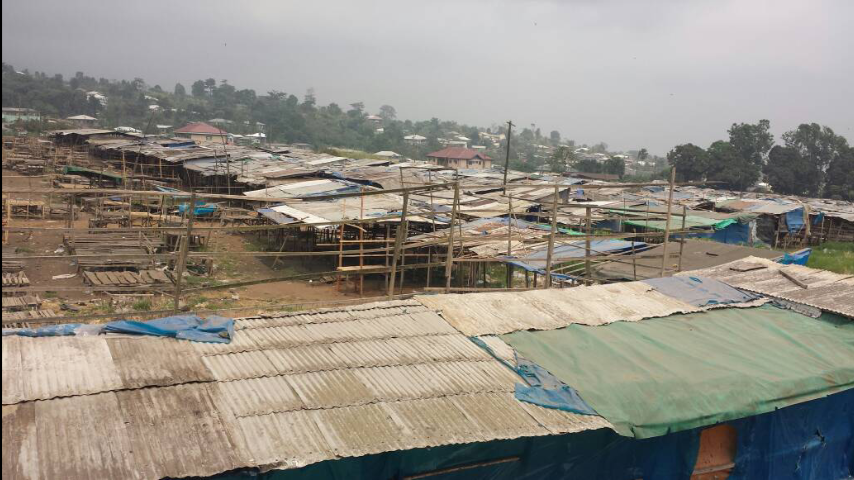 The most parroted Buea Council multi-billion market project which was to be executed under the stewardship of Mayor Patrick Ekema Esunge is today drowning in hoaxes and political rhetoric.
The effective groundwork for what has today turned out to be a monumental political scam was effectively laid in Buea on Friday, February 13, 2015, in a turgid ceremony delineated by epicurean feasting and administrative machinations.

During the February 13, 2015 event, a Memorandum of Collaboration was signed between the Buea Council and Mothercat Cameroon, the executing firm of the project.

The architects of this mega project, in a bid to legalise this scam, invited administrative and diplomatic panjandrums like Southwest Governor, Bernard Okalia Bilai and the then Nigerian Consul General to the Northwest and Southwest Regions, Dan Warib Nwazim, and a host of other administrative functionaries to grace the occasion.

The Easter-like pontificating at the event drew thunderous applause from the desperate Buea populace, who have been yearning for a befitting market in the Southwest Regional capital since the dawn of independence.
Speaking at the event, Mayor Ekema described the FCFA 2.5 billion project as “a memorable day in the history of the Cameroon-Nigeria bilateral cooperation.”

According to him, the accord marks a new milestone in the life of the two countries, given that the project will be on a Build, Operate and Transfer, BOT, basis.
The municipal authority further bragged that the Buea Central Market, upon completion, will be the biggest and the best in the Central African Sub Region.

However, barely four months after the flamboyant and Champaign-pop
ping accord was struck between the Buea Council and Mothercat Cameroon, work at the project site, which kicked-off with the speed of light, began stagnating.

Consequently, sub-contractors of Mothercat Cameroon became restive, seething in rage and promising hell for Alechenu Yusuf, if the money which they have pumped into the project were not refunded.
In a desperate attempt to meet up with his financial commitment to the Sub-Contractors, the CEO of Mothercat Cameroon began soliciting for prospective investors to acquire shares in the company through radio announcements.
This was, however, surprising to many, given that the Mayor had, in his address during the contract signing ceremony, stated that Mothercat Cameroon was a subsidiary of the multibillion dollars construction giant of Nigeria dubbed Mothercat Nigeria.

Rented ‘Pen Pushers’ Validate Market Scam
Meanwhile, when The Post first published an article on the Buea Central Market con game under the headline FCFA 2.5 Billion Deal That Went Sour (The Post 01639 of July 3, 2015), after an in-depth investigation and talking to all parties concerned, the reporters of the article emphatically stated that the project was nothing short of a scam and that it will never be realised given the lack of due diligence for the contract award.

Nonetheless, many apologists of the Buea Council termed the reports as bias, malicious and baseless.
In a bid to counter the report enriched with cast-iron evidence, some ‘commercial reporters’ were ferried in from Bamenda, Yaounde, Limbe, Douala and Kumba to see how the mega project was supposedly progressing and write contrary reports about the project to consequently shame the authors of the initial report.

Before the hired reporters arrived at the project site, a bulldozer had been brought in early that morning to commence work so that upon arrival, the press will immortalise the on-going work and let the public know that everything was fine with the project.

A bus was also hired to take the journalists around and after their visit to the project site, the reporters were taken to a famous Buea hotel for a sumptuous lunch and payola or brown envelopes, if you will, was also shared out for a job well done.

After the visit, some of the hired reporters went viral on social media, giving daily updates about the project. “The Buea Central Market project is 20 percent gone, 30 percent… 32 percent… 40 percent and so on.”
Despite the strong mendacious media crusade, the Buea Central Market project never exceeded the foundation level and it is today conveniently buried in grass.
Why Market Project Was Bound To Fail
The 2.5 billion mega project was bound to fail because it was carried out in total disregards of the rules and regulations in force.

According to the law governing Public contracts in Cameroon, no contract above FCFA 5 million should be awarded without passing through a tenders’ board.
But this was a multibillion project that was never advertised; let alone, going through a tender’s board.

In complicity with some top Buea Council officials, Mothercat Cameroon was hurriedly created and the contract awarded to it, hoping to bring in Cameroonian businessmen to finance the project.
Again, the Buea Council officials were also hoping to use the FCFA 500 million funding secured from the African Development Bank and the National Council Support Fund, FEICOM, to finance the project.
With such funds, the draughtsmen were hoping to succeed, but things didn’t materialise as planned.

Alechenu Yusuf Vanishes As Things Degenerate
Meanwhile, after a deteriorating relationship with his Buea Council accomplices and the disinterest of commercial banks in Cameroon to bankroll the market project, the CEO of Mothercat Cameroon voted out with his feet.

The Buea Central Market project, which was going to engrave Mayor Ekema’s name in the development annals of the municipality, may never see the light of day under his reign, except if he is given another mandate.

Council Begs Business Magnet To Resurrect Moribund Project
Meanwhile, during the last Buea Council session in December, Mayor Patrick Ekema said the Council has terminated her deal with Mothercat Cameroon because the company has failed to honour her engagement.
He, however, assured his Councillors that the Council did not lose even a dim in the failed project. He said the Council is lobbying for Buea-based business magnet, Dr Charles Menyoli to take over the construction of the market.

However, given the controversies surrounding the market project, many think that an astute businessman like Dr Menyoli will not want to tarnish his reputation in such a grubby project. Until this point, the highly parroted FCFA 2.5 billin Buea Central Market project has remained a fiasco.