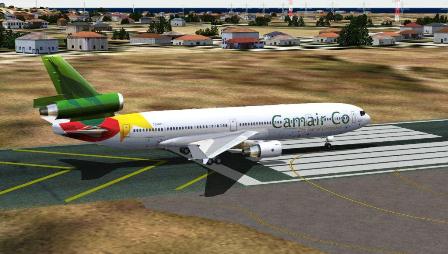 For some weeks now, there have been speculations and rumours in the public as well as some media organs as to the whereabouts of the state-owned Cameroon Airlines Corporation, Camair-Co Boeing 676-300 ER (The Dja).

The Dja is the biggest aircraft in Camair-Co’s fleet

In keeping with instruction from the manufacturer of the plane, Boeing Company, The Dja, which is 15 years old, goes for routine technical checks after every 18 months. The aircraft left Cameroon in December 2015 for a one-month routine check at Ethiopian Airlines in Addis Ababa.
The technical control was programmed to be more intensive than previous ones. Since the Dja is the only aircraft in Camair-Co’s fleet that the airlines has been using for long haul flights (Douala-Paris-Douala), management had to lease an aircraft to replace it during the period of absence.
The Dja Suffers From Corrosion

The Post has learnt from dependable sources both at the Ethiopian Airlines and Camair-Co, that during the intensive technical control of The Dja at the Ethiopian Airlines’ hangar in Addis Ababa, it was discovered that some parts of the airplane had suffered from corrosion, hence necessitating a corrosion repair. Technical experts traced the cause of the corrosion to the three-year period (May 2008 to early 2011) that The Dja was grounded at the Douala International Airport, following the closure of Cameroon Airlines.

After Ethiopian Airlines Engineers discovered the corrosion on The Dja, repairs could not immediately take place because the needed spare parts could not be found because the US aircraft manufacturer has stopped manufacturing Boeing 767, and many spare parts of the plane have gone out of stock.

Ethiopian Airlines and Camair-Co, The Post learnt, finally contacted the Boeing Company to negotiate for the manufacture of the needed spare parts for The Dja. Boeing accepted the request, but needed time to deliver. Meanwhile, Camair-Co and Ethiopian Airlines officials last met in Addis Ababa on April 12, 2016, to discuss some issues related to the ongoing repair works. Camair-Co delegation to the meeting was led by the Deputy Head of Missions at the Cameroon Embassy in Ethiopia, Theodore Njikam.

The General Manager of Camair-Co, Jean-Paul Nana Sandjo, was part of the delegation. The Ethiopian Airlines’ delegation was headed by the Group CEO of the airlines, Tewolde Gebre Mariam.

As of April 12, an excerpt from a Memorandum of Understanding that Camair-Co and Ethiopian Airlines signed at the end of the meeting reads: “The major remaining task is the corrosion repair and waiting for the structural part. And the last part for repair is scheduled from Boeing for May 5, 2016. Ethiopian MRO agreed to work closely with Boeing in expediting the remaining parts and to work in high priority to complete the repair.”

Camair-Co’s management hopes that The Dja will be back in Cameroon by mid-May.
As to what happened to the aircraft that Camair-Co leased to replace The Dja momentarily, The Post has gathered from a highly placed source at the Commercial Department of Camair-Co in Douala that the corporation took the plane on a two month-leasing contract, hoping that the Dja would be back then. Though The Dja did not return, Camair-Co resolved not to extend the contract due to the financial difficulties at the company.

Our source has also debunked media reports that the proprietors of the two Boeing 737s are threatening to withdraw their planes for accumulated debts allegedly owed by Camair-Co, for the leasing of the aircraft.

The payment is supposed to be done quarterly. The source boasted that it is a verifiable fact that despite the difficult financial situation at Camair-Co, the airlines has already paid the proprietors of the two Boeing 737s the leasing bill for March, April and May quarter.

Talking about the two new Chinese-made MA 60 planes which Camair-Co effectively started using last January, technical experts at Camair-Co assure that there is no problem with the quality of the planes.
However, the experts admit that the planes being used for local flights are not yet operating at their optimum. They blame the situation partly on the fact that the management of the Cameroon Civil Aviation Authority grounded the planes for several months when they got to Cameroon last year.

The Post has also learnt that one of the reasons the MA 60s have not being operating optimally is due a shortage of pilots. To solve this problem, Camair-Co sent some Cameroonian pilots to China for training to fly the MA 60. The pilots have returned to the country and are currently going through final procedures, after which they will start work.

As regards allegations that the licenses and medical certificates of some Camair-Co’s pilots have expired, a reliable source close to the management of Camair-Co has also dismissed the allegations as spurious.

The source stresses that the licenses and medical certificates of all Camair-Co’s pilots are up to date, and has challenged those making the allegations to publicly name just one pilot whose license or medical certificate has expired.

From all indications, Camair-Co remains in a very difficult financial situation. Another highly placed source in the Department of Finance at Camair-Co disclosed to The Post that the total debts of the five-year old company are over FCFA 35 billion.

The debts, which have been accumulating since the beginning of Camair–Co, are said to be money owed suppliers and other contractors of the company in different domains like leasing of planes to Camair-CO, supply of fuel to aircraft, insurance cover for aircraft and maintenance work on aircraft, among others.
According to the source, the company continues to suffer a monthly deficit of FCFA 1.5 billion, a deficit attributed to operating with few planes, making it difficult to break even.

Camair-Co’s dire financial situation has also been made worse by the fact that the State subventions have not been fully paid by the Ministry of Finance.
The source has disclosed that the total amount of State subventions owed Camair-Co today stands at FCFA 10.5 billion, which are supposed to be used for the payment of suppliers and other contractors of Camair-Co.

Our source asserts that the complete payment of the subventions will do Camair-Co a lot of good, as the company will be able to reduce its debts owed suppliers and other partners.

Camair-Co may be going through difficult financial times, but authoritative sources at the corporation are unanimous that the future of the airlines is bright.
The biggest problem that has been plaguing Camair-Co is the shortage of planes. Up till the end of last year, Camair-Co was operating barely three planes, with two acquired by leasing. Then the two small MA 60 planes have now added, taking the total number of planes to five.

The current General Manager of Camair-Co, Jean-Paul Nana Sandjo, who came to office mid- 2014, developed a business plan which was approved by the Board of Directors of the company and the Presidency of the Republic.

However, our sources say there is now hope that the business plan will soon be back on the table. Hopes have also been raised by the recommendation made by Boeing Consulting that that Camair-Co needs to have at least 14 planes to be able to operate as a profitable business.

In yet another development which raises more hopes at Camair-Co, the company was early this month issued the credible IOSA certification, after the airlines completed the very challenging certification process, which started in August 2014.

In addition, early this month at a ceremony organised at Hilton Hotel Yaounde, Camair-Co was formally admitted into the International Air Transport Association, IATA.
The Vice President of IATA for Africa, Raphael Kuache, signed the document on behalf of his association, while Jean Paul Nana Sandjo signed for the national carrier.

Camair-Co has also become a member of the Clearing House. All these bring credibility to Camair-Co.
To make the hopes in Camair-Co more concrete is the fact that the new Minister of Transport, Edgard Alain Mebe Ngo’o, is very committed to see Camair-Co fly.

Regarding the issue of Camair-Co’s personnel salaries, our source at the Department of Finance says the company owes only the salary of March 2016. Hence, there is no social tension between management and the personnel.