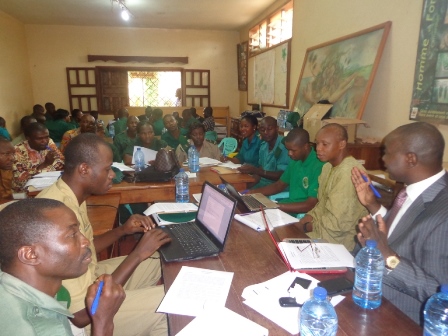 By Isidore Abah With Field Reports

40 control officers of the Ministry of Forestry and Wildlife, MINFOF, in the East Region of Cameroon have taken an oath as judicial police officers with special competence to investigate, initiate and follow up Court cases relating to forestry and wildlife offenses.

The MINFOF personnel, comprising eco-guards, Conservators of Boumba Bek, Nki and Lobeke National Parks and the Delegate of Boumba and Ngoko Division, were recently sworn-in at the Yokadouma Court, after a two-day training organised by WWF on the application of the forestry and wildlife law and the judiciary procedure for seizing the Courts on legal matters.

The landscape of Southeast Cameroon harbours many protected areas namely the Dja Biosphere, the Ngoyla-Mintom Forest block, and the Nki, Boumba Bek and Lobeke national parks.

The zone boasts of a significant variety of animal populations with flagship wildlife species like the African elephant, great apes and hippopotamus.

However, this biodiversity is greatly threatened by elephant poaching and trafficking of all kinds thanks to the increasing demand of wildlife products such as elephant tusks in both the national and international markets.

Many initiatives and actions often undertaken by MINFOF with the support of partners like WWF in order to ensure application of laws in force have resulted in arrests of suspects and legal action before competent Courts.

Often, the writing, transmission and defence of law suits in Courts do not always conform to legal prescriptions, resulting in rejections and important loss for the State of Cameroon.

In order to fill the gap, WWF organised a two-day training workshop aimed at arming the MINFOF personnel with legal provisions relating to the application of the law on repression of poaching and illegal wildlife trade.

Among others, the training focused on; the code of ethics and principals relating to indigenous peoples and conservation, seizing the Courts and the judiciary procedure, the national law regulating the wildlife sector and the state of poaching in Southeast Cameroon.

Presiding at the solemn swearing in ceremony, the President of the Court said wildlife criminality has taken a new dimension in the East Region, urging the newly sworn-in officials to do their job with utmost dedication and in respect of the law.

In the Boumba and Ngoko Division of the East Region of Cameroon where poaching and illegal wood exploitation are commonplace, the need to pursue legal action is not only urgent, but also vital in curbing the vices.