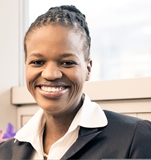 A woman, Philisiwe Gugulethu Sibiya, will, with effect from April 1, 2015, take over as Chief Executive Officer, CEO, of MTN Cameroon.

Sibiya, of South African nationality, takes over from Karl Toriola, a Nigerian who moves of to the Middle East as CEO of MTN in three countries. Toriola was appointed CEO of MTN Cameroon in December 2011.

Sibiya was presented to MTN staff, partners and the general public on March 26 at Star Land Hotel in Douala.

The General Manager of Human Resources and Administration at MTN Cameroon, Victor Oben, after observing that the only thing that is constant in life is change, said in 2011, MTN Cameroon welcomed Toriola. He praised Toriola for his assiduity towards work and how through him, MTN staff learnt how to be assiduous at work.

He observed that through his hard work and commitment, MTN has registered “significant growth and earned 60 percent market share.

Asserting that 40 percent of MTN workforce is female, Oben enthused: “MTN Cameroon is breaking new grounds as we welcome the first female CEO… someone who has by her own right and merit earned the position.

Appealing for support to Sibiya, Oben told her; “Staff and the management of MTN Cameroon are looking forward to brighter days, with you.

The representative of an MTN partner, HUAWEI, hailed the healthy partnership between their two institutions. She wished the partnership would earn mutual and more growth with Sibiya and told Toriola; “Wherever you go, may our good wishes follow you.”

Toriola, after MTN staff and Cameroonians in the native languages of the regions of Cameroon, asserted that MTN Cameroon has “established a culture where anyone can move up to the General Manager and tell him what he or she thinks about the company.”

Observing that the company has increased salaries and bonuses to staff, Toriola said; “We have developed and transformed people in MTN Cameroon. Over 30 new managerial positions are occupied by Cameroonians.”

Sibiya said when she was appointed, she asked her boss; “How do you take an organisation which has been taken to such heights? How do you take a company that has 60 percent market share and 40 percent revenue increase?”

She intimated that the boss quipped: “That is why you have been appointed.”

Remarking that she was in Cameroon when MTN just came, Sibiya said; “I am excited to be in Cameroon.

To Toriola, Sibiya said; “You left me a big gift,” referring to the 3G – 4G, other innovations in Telecoms and the staff of MTN Cameroon.

An announcement proclaiming the appointment of Sibiya signed by the Chairman of the Board, MTN Cameroon Ltd, Colin E. Mukete stated that, prior to her appointment at MTN Cameroon; she was Chief Finance Officer of MTN South Africa. She is a qualified Chartered Accountant with an excellent track record and extensive experience in the Telecoms sector.

She has occupied several Senior Management positions both at MTN South Africa and MTN Group. Before joining MTN Group in 2005, she worked for Arthur Andersen, PRIMEDIA and Cell C in South Africa.

“Mrs. Sibiya will have the responsibility of maintaining MTN Cameroon’s growth trajectory and reinforce its market leadership in an increasingly competitive telecommunications sector.

Since 2011, MTN Cameroon has witnessed a tremendous growth of close to 100 percent of its subscriber base, with just over 60 percent market share, making it one of the best performing operations in the MTN Group, alongside Nigeria, Iran and South Africa.”